There is a wide net cast by the payroll tax legislation as many contractors are likely to be caught unless an exception can be obtained.

Payroll tax is a tax imposed by each state and territory in Australia where the employer’s taxable wages (including any employer superannuation contributions and assessable ‘fringe’ benefits) exceeds the relevant threshold for the period. Payroll tax is levied on wages paid by an employer to an employee and also covers certain payments to contractors. In particular, payroll tax can be imposed on payments to contractors especially under the ‘relevant contract’ provisions.

As previously discussed in this series of articles on employees versus contractors, how the relationship between a worker and a business is documented and managed is key to such things as employee entitlements (eg, annual and long service leave entitlements, unfair dismissal and other employee protections), PAYGo and the super guarantee (SG) regime.  The state and territory payroll tax regimes expand the payroll tax net even wider under the ‘relevant contract’ provisions than the PAYGo and SG regimes.

Diagrammatically this can be depicted as: 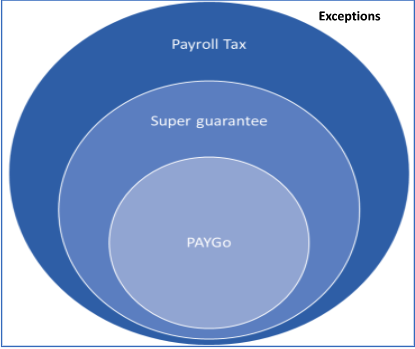 This article provides a top-level summary of the payroll tax regime and focuses on the ‘relevant contract’ provisions. Fortunately, most Australian states and territories have harmonised many aspects of their payroll tax legislation. However, you need to check the legislation in the appropriate jurisdiction to ensure you comply with the relevant rules; especially as each state and territory has established its own payroll tax rates, thresholds and registration criteria. Given this article is to provide an overview on payroll tax, unless express reference to a particular jurisdiction is made, our comments refer to the Victorian payroll tax legislation.

The Payroll Tax Australia website provides links to legislation in each state and territory. As you would appreciate, significant penalties can be imposed for non-compliance, late lodgement and the like.

If the threshold amount is exceeded, then that employer is liable to pay payroll tax in the relevant state or territory. The threshold amount is the total taxable wages of an employer paid or payable across all states and territories. For example, in Victoria the threshold is $700,000 compared to $2,000,000 in the ACT. Payroll tax is self-assessed by each employer. Note that related entities are grouped to determine the payroll tax liabilities of a group of employers.

If a worker meets the legal definition of an employee, the employer will be liable to payroll tax on payments of taxable wages.

In determining if an employer-employee relationship exists, the typical tests are applied. Where there is a comprehensive written contract, the courts focus on the rights and obligations under that agreement to determine whether the relationship is that of employer-employee or one of principal and contractor. If there is no comprehensive written contract, the court will apply a multifactorial test to determine whether the person is an employee or a contractor. For guidance, please refer to our prior two articles in this series:

Payments to contractors can be liable to payroll tax

As noted above, payroll tax extends beyond the typical employer-employee relationship to cover payments to contractors. Broadly, there are three key steps in determining whether there is a payroll tax liability in respect of a payment to a contractor:

What is a relevant contract?

(b) has supplied to the designated person the services of persons for or in relation to the performance of work; or …

Thus, a payment to a person is covered by the relevant contract provisions if paragraph’s (a) or (b) above are satisfied. Relevantly, the State Revenue Office of Victoria’s website states:

This covers most contractual arrangements between two persons each of whom supplies or receives such services in the course of a business.

Payments under these contracts are deemed to be wages (excluding GST). The principal who engages the contractor is deemed to be an employer who is liable for payroll tax on those wages.

The application of these provisions are best explained by analysing several recent cases where these ‘relevant contract’ provisions have been applied in Victoria and NSW.

Section 35 of the PTA provides:

This provision deems payments for relevant contracts to be wages for payroll tax purposes.

At first instance, the Victorian Civil and Administrative Tribunal found, in summary, that the agreements between TOS and optometrists were relevant contracts but the amounts paid to them were not ‘paid for work relating to a relevant contract’ because those amounts were paid to the optometrists from an express trust (ie, the payments were held on trust by TOS for each optometrist reflecting the fees collected for each optometrist). (The Optical Superstore Pty Ltd as Trustee for OS Management S Trust & Ors v Commissioner of State Revenue (Review and Regulation) [2018] VCAT 169).

The SRO appealed to the Supreme Court which dismissed the appeal against the Tribunal’s decision that patient fees held on express trust could not constitute payments relating to a relevant contract. (Commissioner of State Revenue v The Optical Superstore Pty Ltd as Trustee for OS Management S Trust and Ors [2018] VSC 525).

On the SRO’s further leave application and appeal, the Victorian Court of Appeal allowed the appeal and held that the ordinary meaning of ‘payment’ embraced a payment of money to a person beneficially entitled to that money. Thus, the payments to the optometrists were subject to payroll tax. (Commissioner of State Revenue v The Optical Superstore Pty Ltd as Trustee for OS Management S Trust and Ors [2019] VSCA 197).

TOS’ special leave application to the High Court of Australia was denied.

The NSW Civil and Administrative Tribunal (NCAT) in Thomas and Naaz Pty Ltd v Chief Commissioner of State Revenue [2019] NSWCAT 145 considered whether payments by a medical centre to doctors were subject to payroll tax under the NSW relevant contract provisions. The facts in this decision involved Naaz Pty Ltd (Naaz) operating three medical centres with each doctor (or a related entity of each doctor) entering into a written agreement with Naaz that included, among other things, the following terms and conditions:

In summary, Naaz provided the clinic from which the doctors could service patients and retained 30% of every $1.00 of patient fees for providing the services. The 70% of patient fees paid by Naaz to the doctors was subject to payroll tax under the NSW relevant contract provisions (which are the same provisions as Victoria).

NCAT held that the agreements secured the service of the doctors for the benefit of Naaz and therefore the doctors were not only providing services to Naaz but also to the patients. As the services were work-related, NCAT was satisfied the agreements between Naaz and each doctor were 'relevant contracts' under s 32(1)(b) of the Payroll Tax Act 2007 (NSW). NCAT was also satisfied that the payments had a clear relationship with the performance of the work.

NSW payroll tax was therefore held to be properly levied on the payments made by a medical clinic to doctors under a service agreement where the doctors thought they were paying the medical clinic a service fee for services provided through the clinic by each doctor conducting their own professional practice.

Naaz was unsuccessful in its appeal against the decision to the Appeal Panel of the NCAT (refer Thomas and Naaz Pty Ltd (ACN 101 491 703) v Chief Commissioner of State Revenue [2022] NSWCATAP 220). An appeal has since been lodged in the NSW Supreme Court. Thus, the final outcome of this case is still pending.

Summary of the above relevant contract cases

Many are surprised to learn about the breadth of the payroll tax provisions. There also appears to be increasing audit activity by state and territory revenue offices in relation to arrangements similar to those involved in the above cases. Thus, advisers need to be aware of similar arrangements where payroll tax exposure may arise and take proactive steps to ensure compliance. In relevant cases, a voluntary disclosure to minimise future penalties may also be required.

Some exceptions which mean that payroll tax is not relevant to a work relationship include contracts where:

The breadth of the superannuation guarantee (SG) provisions in relation to contractors also requires monitoring in view of recent decisions such as Dental Corporation Pty Ltd v Moffet [2020] FCAFC 118 which examined the breadth of s 12(3) of the Superannuation Guarantee (Administration) Act 1992 (Cth). Further, the High Court in the recent case of ZG Operations Australia Pty Ltd v Jamsek [2022] HCA 2 remitted the SG question relating to s 12(3) to the Full Court of the Federal Court for review. We discuss the SG matters in our prior articles (Part 1 & 2, see the links below) and will issue a further update once the outcome of this decision is finalised.

Businesses must in addition to payroll tax be compliant with the range of other obligations and taxes arising from engaging labour including PAYGo, SG, workcover insurance and employee entitlements which have been covered in our prior articles in Part 1 & 2.

Significant penalties, costs and reputational damage can arise for non-compliance. 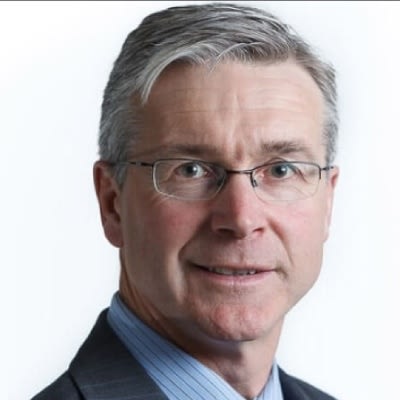