The abundance of uncertainty necessitates a neutral exposure to equities, higher levels of cash and a readiness to act where events produce investment opportunities.

The supply shocks emanating from the war in Ukraine and sanctions on Russia are weighing on growth and lifting inflation through higher energy, food and metals prices. Supply chains and trade flows, already complicated by the pandemic, are further troubled. Business and consumer confidence has been hit by increased uncertainty and central banks are encouraged to unwind stimulatory monetary policy faster than was previously expected.

The near-term outlook for key economies varies considerably. Europe is most impacted by the war given its close trade and financial ties with Ukraine and Russia and reliance on Russian energy. China and other Asian countries have modest trade ties with Europe but will be impacted by slowing growth there along with higher energy costs. Some emerging economies will benefit from higher export earnings from increased commodity prices but should the US dollar continue to rise others will suffer more acutely from rising food and other prices and higher foreign debt costs.

The US stands out from other key economies in the degree of pent-up demand and unspent stimulus from the pandemic. These supports should allow growth to continue despite unwinding of monetary stimulus. The US will be less affected by the war because of its relatively minor trade links with Ukraine and Russia and its energy self-sufficiency. However, higher energy prices and further supply chain problems are still likely to weigh on growth and lift inflation in the next several months.

Income adjusted for the elevated rate of inflation in the US has declined since the start of the year despite higher nominal wages and this is likely to encourage a deceleration in consumption from its recent rapid pace. In addition, job creation is likely to slow from the outsized 431,000 new jobs in March 2022 as the labour market tightens and producers adjust to moderating demand growth. Inventories (supply) have slightly run ahead of new industrial orders (demand) in the last two months. 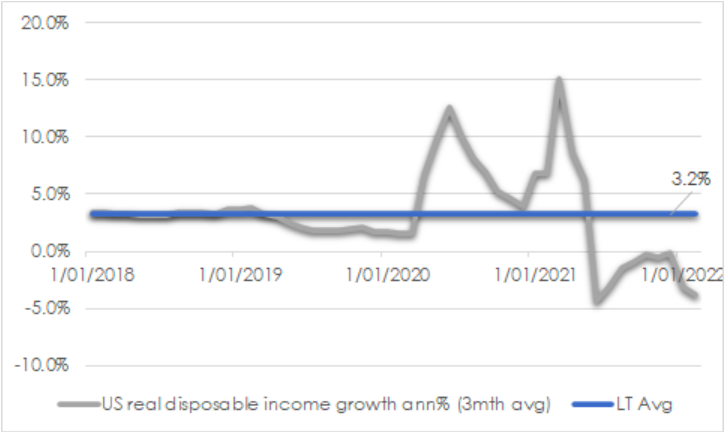 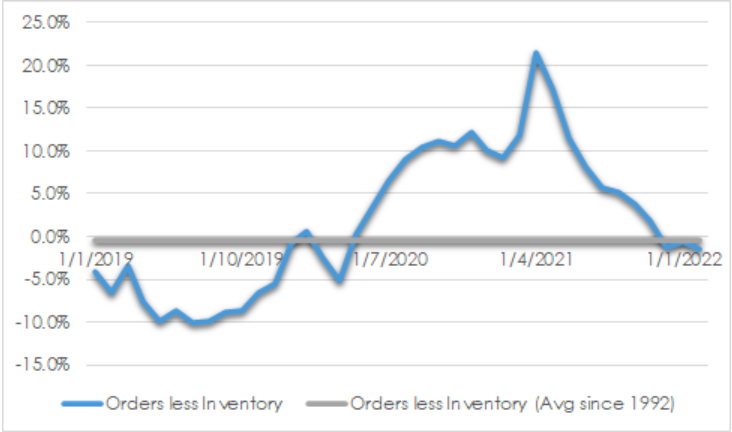 Inflation yet to peak

Inflation pressures are likely to rise further over the next few months as higher commodity prices feed further into goods prices, lifted wages reflect in services charges and China lockdowns exacerbate supply chain bottlenecks. However intense pricing pressures are likely to fade in the second half of the year while remaining above central bank target levels. Commodity prices will start to roll past comparatively high prior year numbers. Some of the supply chain pressures are easing now that mobility is rising as seen by the over 15% fall in the World Container Index since the start of the year. Companies have so far passed on much of the cost increases but their pricing power could erode as consumer discretionary incomes fall.

Inflation should remain above target levels through next year even as growth moderates. Labour markets should continue to tighten while affordability troubles restrict house construction thereby maintaining upward pressure in rents. Longer term inflation expectations remain relatively subdued at around 2.6% despite their recent lift, and this reinforces the likelihood that actual inflation will subside in time.

Additional energy supply helping to reduce commodity prices should be forthcoming, but this will take time. Russian sanctions may not be removed for many years given the atrocities. OPEC has given little indication it will lift output while US shale producers have so far been unwilling to risk capital to lift output given the damaging impact of oversupply they have faced in the past. Higher prices will cause demand to moderate somewhat and this should work against further rises in the medium term.

Inflation experiences differ regionally. In the US, PCED underlying inflation which strips out volatile factors increased 5.2% in the year to March 2022. The figure could remain around 5 per cent for much of the remainder of the year as war impacts continue to flow through, companies pass cost increases on to customers and services costs rise with increased wages. Underlying inflation should ease to around 3% through 2023 but still above the US Federal Reserve’s 2% target.

Europe’s inflation jump is largely due to the rise in commodity prices. Underlying HICP inflation, which rose 7.4% in the year to March 2022, is likely to rise further in the next few months through higher food and input costs. Cost of living pressures should remain intense through the year despite a mild rise in wages growth from the anaemic 1.5% annualised pace as of December 2021. However, demand is beginning to wane, and this should help underlying inflation recede below 2% by the end of 2023.

Japanese headline inflation should lift to around 2% in coming months due to higher commodity prices. However underlying inflation should remain merely around 1% due to corporate preference for investment in productivity over wages given ongoing labour shortage problems.

Since the onset of the pandemic, fiscal and monetary policy acted together to encourage activity and avoid a protracted downturn. Now these bodies are working in opposite directions. Governments are helping support consumption through the energy supply shock through tax credits and reduced fuel excises. Central banks are belatedly targeting inflation by raising rates and unwinding asset purchases. The USD 1.9 trillion US fiscal package in March 2021 gave an extra boost to an economy already speedily rebounding from the downturn. Little additional fiscal support is likely given the political stalemate in US Congress and likelihood of a Republican majority after the upcoming mid-term elections. However, Europe should see greater fiscal support over the next couple of years through increased spending on defence and renewable energy.

Tighter monetary policy is likely to add to the likelihood of a growth slowdown in the next year or so. Recession is looming as an increased possibility but it is more probable that the high level of public and private debt will prevent central banks from tightening excessively. A slower trajectory of rate rises than is currently priced into markets is likely given that monetary authorities will want to avoid a crash in debt and equity markets.

The abundance of uncertainty necessitates a neutral exposure to equities, higher levels of cash and a readiness to act where events produce investment opportunities. It is clear that US and Australian central banks have waited too long to remove extraordinarily accommodative monetary policy so the catch up now could initially be more dramatic than might have been.

Equities could be pressured later in the year by the growth slowdown along with the possibility that central banks may lift rates more than the economy can withstand. We prefer equities over bonds given the strength of corporate profits and balance sheets, but this may change as the year progresses. Multiples could be further pressured as bond yields rise while margins weaken as companies are less able to pass cost increases on to consumers that are struggling against higher living costs.

Earnings will be the predominant driver of equity returns. Global expansion continues, but downside risks are rising. Companies with pricing power and enduring growth streams are likely to perform best. A more cautious approach to cyclical exposures is warranted.

Among indications of rising demand and problematic supply related to the shift to reduce Russian energy dependency, our temporary holdings in resources-producing companies help protect from upside risks to commodity prices.

It remains wise to be underweight fixed interest with modestly shorter duration than the benchmark. Inflation is likely to lift further in the short term so long bond yields could drift higher. Credit spreads have widened but not by enough yet to offer absolute value. We focus our credit holdings on high quality where default risk is very low.

Written by Andrew Doherty, AssureInvest
Last Updated: 08 December 2022
Published: 06 May 2022
You need to be a member to post comments. Register for free today