A range of professional bodies have requested a carve out for CCs from NALI to provide more fairness and to protect members’ compulsory minimum superannuation guarantee (SG) contributions from being subject to excessive tax rates.

When does NALI/NALE apply to contributions?

The ATO’s view is that a general fund expense such as a $100 discount on an accounting or adviser fee can taint all of a fund’s income (including all ordinary and statutory income). This ATO view is reflected in Law Companion Ruling LCR 2021/2 that issued on 28 July 2021. The following paragraphs are extracted from this ruling (with some modification):

It is possible for NALI to be invoked in a superannuation fund context by a fund obtaining a lower general expense or a lower specific expense that relates specifically to the contributions in question. However, a fund’s contributions are most likely going to be exposed to NALI due to a lower general fund expense (eg, a $100 discounted adviser fee).

The following extract from the ATO’s website (refer to QC 19749) illustrates the severe tax rate that can apply to excess NCCs even where NALI does not apply:

Would NALI apply to a large APRA fund as well as to an SMSF?

The short answer is yes. However, the ramifications of NALI being applied to a large APRA fund can be ginormous. The following table reflects the impact on NALI applying to contributions to:

The ATO appears to be aware of the above risks given its comments in the following paragraphs in LCR 2021/2:

What is interesting here is the ATO’s view that a lower general fund expense can have a sufficient nexus to all of a fund’s income (including the fund’s statutory income which includes CCs). The ATO reasoning here also results in the case of the large APRA fund being subject to NALE relating to say a $100 accounting fee discount to 2,300,000 plus members’ compulsory minimum SG contributions being subject to a 45% or higher tax rate. Based on the large APRA fund’s FY2020 financial statements discussed above, this would increase its tax on CCs alone by around $3,647 million (assuming there were no excess contributions).

We submit that CCs should be excluded from NALI as CCs are a contribution of capital to a fund and are not in the nature of income; CCs are only deemed by statute to be income (ie, statutory income). There is unlikely to be much causal connection between a lower expense and the contributions that a fund may receive.

The attached spreadsheet shows the detailed analysis of how we calculated the tax rates shown in the Executive Summary below.

The spreadsheet shows the assumptions and thinking behind the calculations. Please note that the tax rates in the spreadsheet and Executive Summary reflect nominal and not effective tax rates. Naturally, if you think there is any error, we would welcome your feedback.

Advisers need to be aware of the above tax rates that can apply to contributions as many do not factor in the NALI risk when providing advice. Given the considerable uncertainty surrounding NALE and NALI following the finalisation of the ATO’s views in LCR 2021/2 and how easy it is for these rules to be invoked, advisers, especially tax advisers and those providing financial product advice, should start including appropriate warnings to clients of the substantial tax rates that may apply on contributions. Unless they do so, a client who incurs greater than 15% tax on their CCs may seek recovery via legal recovery proceedings.

As you may glean from the above, NALE/NALI can result in some nasty impacts to superannuation funds and members. There are numerous professional bodies seeking legislative change to the NALE/NALI provisions including having contributions (including compulsory minimum SG contributions) excluded from NALI. Hopefully, there is some change forthcoming soon to ensure a better outcome. 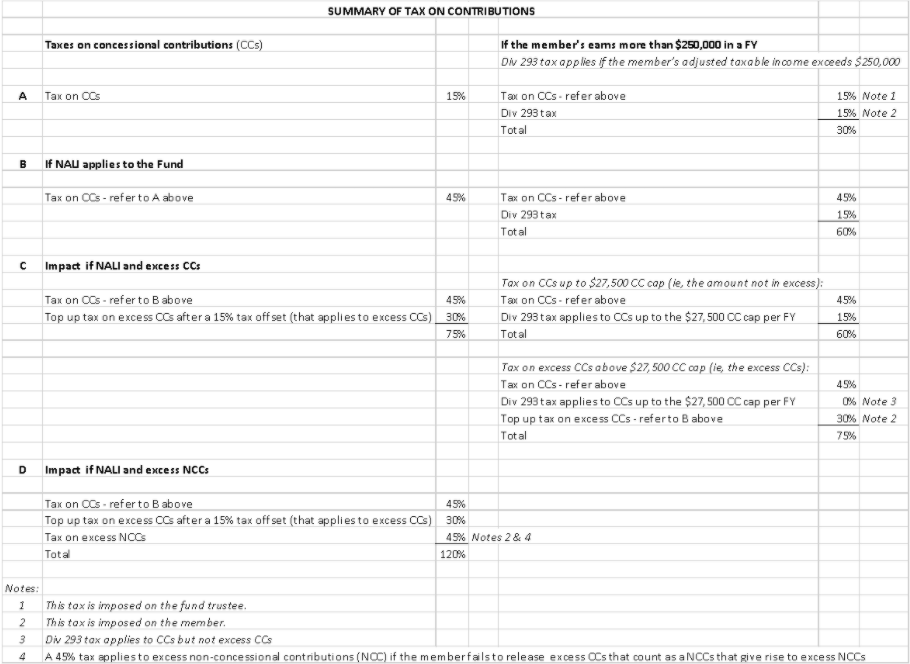