While global growth has slowed significantly since the middle of last year, various factors point to a mild reacceleration in activity later this year and an extended recovery period.

China has an increasingly significant impact on the global economy, having contributed a large proportion of global expansion in recent years. Growth faltered more than expected last year as officials focused on deleveraging and reforming the shadow banking system while underestimating the gravity of the trade conflict with the US.

Recently-enacted policy stimulus looks to be prompting a revival in activity that will be more evident in the second half of this year. Colossal stimulus is unlikely given the financial stability constraints on Chinese authorities. Interest rates and bank reserve requirements have been cut, individual tax rates have been reduced and investments in property and infrastructure have been lifted. Consumer subsidies on green-energy vehicles and appliances aim to support demand in these markets.

The US economy remains in solid shape due to household strength. The slowing in retail sales growth and rise in savings in recent months reflects a more cautious consumer. However, spending should at least stabilise in coming months through jobs and wages growth, rising consumer sentiment and an improvement in housing.

US housing starts are likely to rise from the current subdued 1.2 million per annum pace as the spring selling season progresses. Affordability is being helped by a moderation in asset price and materials inflation. Mortgage interest rates have fallen back to around 4% after reaching as high as 5% in October 2018, a level that was crimping demand. Low rental vacancy rates and the declining supply of homes relative to the number of houses sold provide a growing impetus for construction.

CHART 1: US HOUSING TO LIFT 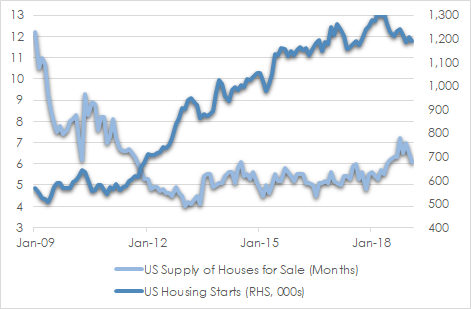 With Australian 10-year yields merely 1.8% and the market pricing in a high chance of rate cuts this year, Australian bonds have limited room to rally further. We favour an underweight and tactical short position to the fixed income asset class and expect yields to catch up to this year’s bounce in equity prices.

Our weighting to equities is neutral overall as gains will be constrained by modest growth and relatively full valuations. An economic downturn is unlikely in the next year or so, but the risks of such are naturally rising as the cycle progresses. Equities typically perform poorly leading in to recessions so we keep working to improve the quality and relative value within our share portfolios. Excesses should begin to be more prominent as the year progresses, particularly through increased debt and risk-taking.

Roller coaster investor experiences of the past year are likely in the remainder of this year. Volatility has recently subsided, but more distinct market gyrations should arise that could produce enticing opportunities at more attractive prices. Our overweight cash position and dynamic, long-term, high-quality approach stands in readiness. Key prompts could be unexpected earnings weakness, worsening of trade protectionism, China downturn or lift in inflation.

Given the uncertainties, we encourage investors to focus on long-term fundamentals and not be distracted by short term noise. Selling high-quality businesses during the downturn late in 2018 would have been a poor decision, for example. Investors should ensure reasonable diversification across safe and higher-risk asset classes suitable to their investment objectives and risk tolerance. In equity portfolios, we focus on outstanding businesses but have also found some out-of-favour value stocks that provide upside. Suitable diversification helps smooth returns through volatile periods.

The US Federal Reserve’s pivot late in 2018 to more supportive monetary settings from a tightening path was based on concerns over slowing economic growth, weakening share prices, uncertainties relating to trade policies and lack of inflation pressures despite low unemployment.

We now expect no change in US rates until at least the end of this year. One or two rate hikes are likely by mid-2020. The US Federal Reserve balance sheet will no longer be reduced from September this year.

The US Federal Reserve now prefers to leave rates on hold as does not see evidence of asset bubbles forming and it is confident it can quickly pull Inflation back to the 2 per cent target if it does start to run up. High debt levels mean economic conditions are more significantly impacted by rate moves than in the past.

The possibility of US rate cuts this year cannot be ruled out, though they are unlikely. A large drop in inflation, a sharper than expected slowdown in US or global activity, or an unforeseen shock threatening the stability of financial markets would be required. Given the low level of interest rates relative to historic averages, it is far more likely that the US Federal Reserve will prefer to retain its firepower.

There are indications of a softer stance on inflation as it steers to its mandate of maximum employment and price stability. US Federal Reserve officials have been surprised by the rise in workforce participation by people who had previously been retired or discouraged from work. This indicates a larger pool of potential employees that companies could call on which in turn reduces upward wage pressure.

Increasing opportunities are enticing more people into the workforce, seen in the rise in the participation rate to 63.1 per cent in March 2019 from 62.9% a year earlier. Importantly, a sizeable portion of these gains are amongst people of the “prime” working age, being 24 to 54 years. 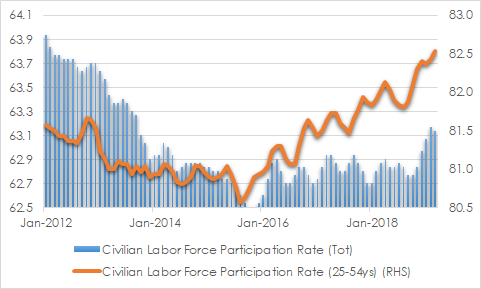 The rise in oil prices to USD 65/boe from USD 45/boe in December 2018 has only mildly been reflected in US inflation expectations. 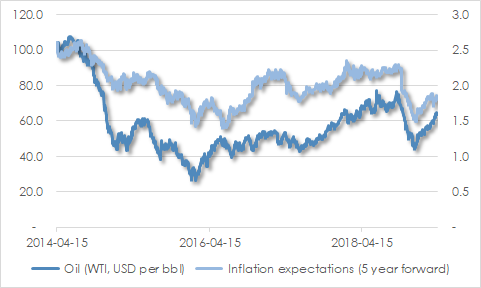 The US Federal Reserve has made downbeat statements on the outlook for the US economy in recent announcements. This has prompted a sharp decline in the US 10-year bond yield which in turn makes the raising of rates less likely. It appears averse to the yield curve going inverted, that is, long-term bond yields below short-term rates. An inverted yield curve, when sustained, has in the past preceded recessions over the following year or two. On this measure, the next rate hike is unlikely until the US 10-year bond yield approaches 3.00 per cent.

Written by Andrew Doherty
Last Updated: 08 December 2022
Published: 03 May 2019
You need to be a member to post comments. Register for free today