2019 another rollercoaster for SMSF investors

While equity valuations are more appealing at the moment and corporate earnings remain robust, there are a few signs of an imminent recession.

Opportunities for selective investment are offered by over-pessimistic pricing in some areas. Equity valuations are generally more appealing, corporate earnings have slowed but remain robust and there are few signs of an imminent recession. The pause in US rates should, help asset prices inflate further, providing the opportunity to lighten equity positions as the year progresses. Fundamental conditions could worsen leading into next year.

Investors should focus on competitively advantaged businesses generating strong free cash flow with some earnings growth, low debt levels, and therefore better able to withstand rising interest costs, and the ability to pass rising wages and other expenses on to customers. We prefer companies exhibiting structural and therefore more sustained expansion rather than cyclical and less reliable growth.

We maintain elevated cash levels, an underweighting to fixed interest and a dynamic and flexible approach, ready to seize better priced high-quality assets when chances arise.

Timing of the next economic downturn has weighed heavily on recent investor sentiment. Global growth has slowed following a period of strength and earnings expectations have declined. A recession however is not on the immediate horizon.

Monetary policy remains accommodative. Central banks are keen to normalise policy rates but are reluctant to move too quickly and kill the recovery. Fiscal policy is more supportive in some areas including through tax cuts to match last year’s US reforms, the ending of austerity measures and stimulus in some emerging markets to offset the international slowdown.

There are few signs of overspending by businesses or overheating in labour and goods markets that might indicate the end of the cycle is nigh, Manufacturing expansion has declined, as seen in recent Purchase Managers Index data, but services activity is still robust. Consumption and investment are strong, and consumer and business confidence remain above average. Key is the continuing tightening of labour markets and presence of business growth opportunities especially for domestically-focused and services-focused firms which are not as heavily hit by trade policy uncertainty. 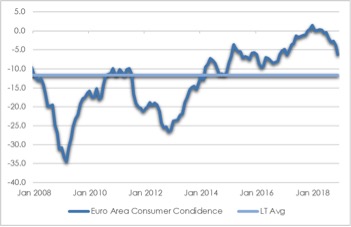 The shifted approach to US monetary policy positioning has important implications for investment markets. The US Federal Reserve has created a new source of market uncertainty by moving away from an extended period of slow and steady interest rate moves to greater data dependency. It now hopes to pause rate hikes so not interfere with the economic recovery. The new approach is a reaction to concerns over friction between the globe’s two largest economies – the US and China -- plus financial market worries that there may have been too speedy a tightening.

The US Federal Reserve is gradually reducing by up to US$50 billion per month the size of its balance sheet built up from quantitative easing measures. It has indicated it may become more flexible on that front, possibly leaving he balance sheet larger than previously expected. Doing so would result in a more accommodative and therefore inflationary monetary stance.

We now expect just two US rate hikes this year. The first not until June and the next in December. Underlying US inflation is only slightly below the 2% target, yet monetary policy is a long way from being restrictive. US rates currently at 2.25-2.5% are well below nominal GDP growth (real GDP growth plus inflation) around 4.8%.

Tighter labour markets are finally feeding through to higher wages. US unemployment is only 4% and likely to fall further this year as solid expansion continues. Wages growth has been restricted in recent years by structural forces like aging demographics, automation and globalisation which allowed the flood of cheap Chinese labour. These forces are beginning to be counteracted by efforts such as protectionism and wealth redistribution aimed at addressing the issues that have given rise to populism. 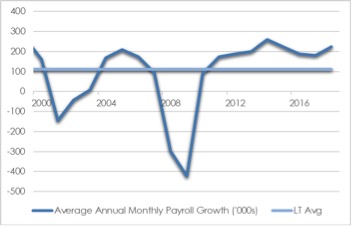 The US budget deficit is expected to rise to USD1 trillion this year through tax cuts and increased military spending at a time the deficit would typically be reduced. The late-cycle increase is likely to add to economic stimulus which will encourage more rate hikes than would otherwise be the case.

By the end of this year, the US Federal Reserve may feel it needs to play catch up to avoid an excessive rise in wages and corporate and government debt. Faster hikes then could threaten a more substantial downturn later in 2020 as higher interest charges weigh on consumption, housing and business spending.

US-China tensions are likely to moderate but not dissipate this year. The US has taken on a far more combative approach than it has on the past and wants to restrict China’s growing international technological and strategic influence. It seeks more open markets with fewer subsidies on Chinese products and increased protections on intellectual property. China is keen to regain its position as an equal, if not the leading, global superpower. It will have difficulty in meeting all US requests.

Trade tensions cause significant pain for both parties, so there is significant motivation for some form of interim deal. This would enable a lift to real activity, especially business investment and trade. Falling manufacturing purchase managers index (PMI) data show tariffs are a lose/lose situation. China manufacturing PMI fell to 49.4 from 50.8 in the last quarter of 2018. US manufacturing PMI fell to 57.6 from 60.3 in the same period. President Xi has recently indicated an interest in increasing US imports and making it easier for international companies to invest in China.

There is some chance however that trade tensions could flare up between the US and Europe once China tensions settle, should the US Administration look to tackle the European trade deficit. 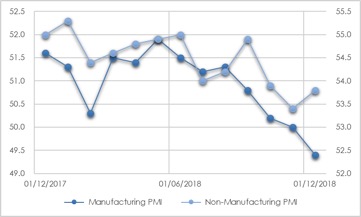 2019 another rollercoaster for SMSF investors

Written by Andrew Doherty
Last Updated: 08 December 2022
Published: 22 February 2019
You need to be a member to post comments. Register for free today