A rapid rise in US bond yields, a reappraisal of valuations for strongly performing technology and healthcare stocks, and concerns about the impact of geopolitical conflicts on earnings have triggered a recent sell-off in stocks – and none of these factors will disappear in a hurry.

The three triggers for the recent sell-off in stocks were the rapid rise in US bond yields, a reappraisal of valuations for strongly-performing technology and healthcare stocks and concerns about the impact of geopolitical conflicts on earnings. None of these factors will disappear in a hurry so investors should be prepared for further volatility ahead.

There is more value on offer for selective purchases, but prices are not yet cheap enough to shift away from our neutral exposure to the equities asset class.

Our direct equity portfolios favour competitively-advantaged cash-generative companies providing sustained growth despite the difficult conditions and who possess the ability to pass cost increases on to customers. We are watchful of valuations particularly in technology sectors and are less interested in no-growth high-yielders that will perform poorly as bond yields march higher.

We are underweight fixed income as markets are likely to continue to be surprised by the rise in inflation. Solid US growth and tightening labour market will assist general price rises. The US 10-year bond yield has lifted substantially in the last year and is likely to move higher over the next 12 months. There are also fewer buyers now that central banks led by the US Federal Reserve are winding back asset purchases.

We continue to carry additional cash balances, so we can take advantage of opportunities to invest as they arise.

Moderating China growth has been felt around the world though renewed stimulus efforts should arrest the slide in the short term. Fiscal imbalances remain a concern that must be reckoned with at some stage, likely through a slower growth trajectory over the longer term.

A US recession is a clear risk for stock prices but there is little evidence that this is imminent. Warning signs that often precede downturns are not yet present, such as over-consumption, over-investment including a housing bubble or excessive wages rises.

Recessions are typically caused by excessive monetary tightening, a credit crunch or a global shock such as rapidly rising energy prices. But US Federal Reserve rate rises have so far been modest and measured. The US Federal Reserve could push rates too high, but that moment is still some time away.

We do however anticipate problems building in 2020 as the labour market overheats and the US Federal Reserve moves to a less accommodative monetary policy. As a result, we expect to become increasingly cautious on stocks as 2019 progresses. As the next bear market eventuates, there will be some excellent opportunities for long-term investors willing to put up with short-term volatility.

As always, our focus will remain on premium assets with low leverage which tend to outperform in times of uncertainty.

US economy still powering ahead

For now, the US economy is delivering solid growth supported by tax cuts, fiscal spending and reduced regulation. Companies are adjusting to incentives to fully expense capital equipment. The banking sector is in good shape and financial conditions are still supportive despite US Federate Reserve rate rises so far. 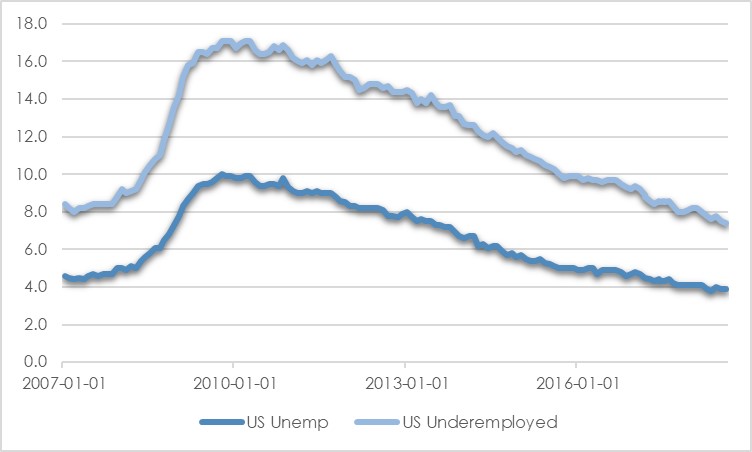 US labour market participation has been improving. A key question to ongoing jobs growth is how many people might enter the workforce, but the ageing population diminishes this potential. Unemployment is down to 3.9% and skilled employees are becoming harder to find. U-6 underemployed –those people that are employed but would prefer more work-- are only 7.4% of the population, the lowest since 2000.

The strong labour market has lifted consumer confidence. University of Michigan Consumer Sentiment is higher than it has been since prior to the “tech wreck” in year 2000 and comfortably above the average since 1978.

However actual spending patterns reflect more caution than sentiment data may imply. Housing affordability is becoming more of a problem. Housing has been softening due to the rise in mortgage interest rates which have run ahead of wage increases. Mortgage rates have lifted 100bps in the last year. Average home prices are rising around 6% annually while materials costs are also increasing. 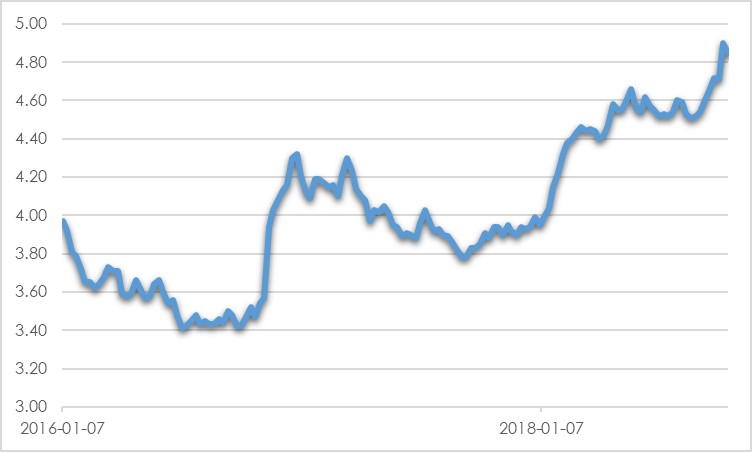 Three complex geopolitical deadlock issues are muddying the outlook. We anticipate rational compromise outcomes for Italian finances and extraction of Britain from the European Union. However, US-China relations appear to have shifted to a difficult state and policy implications may be longer lasting.

Structural problems relating to the European monetary union and inadequate fiscal coordination remain. These will take many years to resolve and depend on the tenacity of the various member states. However, the rise of nationalism is hampering unification efforts. Right-leaning parties have expanded their influence in several areas. Populist parties are encouraging less fiscal conservatism-- strikingly evident in Italy.

Resolution on Italy’s budget with EU officials remains distant but some compromise is likely and necessary. The planned 2.4 per cent of GDP deficit for 2019-21 is significantly higher than the previously agreed 0.8% and growth estimates differ significantly. Widening Italian spreads on sovereign securities reflect the growing likelihood of credit ratings agency downgrades. The expected increase in fiscal spending should assist short-term growth but add to funding constraints in the longer-term.

Much depends on the British Government avoiding a chaotic “no-deal” crash out of the EU. There is little chance of a rate rise until there is greater certainty. Highly regarded Bank of England Governor Mark Carney has promised to stay on until the end of 2020 to provide continuity.

The prospects of a no deal Brexit have increased given the closing gap to the 29 March 2019 deadline. Most likely is the formation of a compromise arrangement allowing a softer Brexit involving continued British access to the common market with some of the complex unresolved issues shifted into a next phase of negotiations. Amongst these are arrangements in relation to the border with Northern Ireland, Gibraltar, regional security and mechanisms for resolving future trade disputes.

US/China trade tensions are likely to be long lasting and could easily worsen. The US appears to be shifting its stance, now seeing its relationship with China as more combative. US policies are now seeking to contain the growth in China’s global strategic and economic influence. China is unlikely to concede easily and is likely to make conditions for US companies operating in China more challenging. To this point the global economic impact appears modest though there will be some resultant moderation to potential growth and some lift to inflation.

The revised US, Mexico and Canada free trade agreement, now called “United States–Mexico–Canada Agreement” (USMCA) provides some comfort for the direction of trade deals. Each party gave partial ground with the core of the arrangement left unchanged. The new deal however does reflect the growing rivalry between the US and China. It includes a thinly-veiled US warning to the other parties not to do any side deals with China. USMCA allows the US to pull out if one country pursues a separate free trade agreement with a “non-market country”.

Written by Andrew Doherty
Last Updated: 08 December 2022
Published: 09 November 2018
You need to be a member to post comments. Register for free today