A bumpy outlook for bonds

While there is enough forward momentum in global economic growth to support share price appreciation for a while, SMSFs should be wary of overseas bonds.

Global economic growth is slowing, weighed by declining spare capacity and steady interest rate increases in the US, debt reduction and increased regulation in China and political risks including trade skirmishes that threaten confidence.

However, there is enough forward momentum to support further share price appreciation for a while yet, particularly through ongoing jobs growth across most advanced economies. There are few signs that a deep global recession that would halt the equities bull market is imminent.

We are more worried about bonds than stocks. Bond investors are not being compensated reasonably across the curve for the added risk of holding securities with long term to maturity. Inflation and interest rates are low by historic standards. But investors are still underestimating the path of rate hikes by the US Federal Reserve despite the sharp rise in long bond yields in the last year. Yields will continue to rise as wages inflation accelerates, first in the US where clear skills shortages are developing.

The US is maintaining its robust expansion. GDP growth should be 3 per cent this year, assisted by tax cuts, reduced regulation and increased government spending. Consumer spending, business investment and corporate earnings will benefit despite some drag from higher tariffs. Domestically-focused smaller companies have benefited from US dollar strength that has reduced the cost of imports.

US growth momentum is likely to fade through next year as higher rates bite more substantially and job creation is constrained by a tightening labour market. A recession is unlikely before 2020.

Europe meanwhile continues to stumble along. Domestic demand is being supported by extraordinary monetary stimulus and expanded exports. Growth has slowed this year but is unlikely to flop. Some second half improvement is likely. GDP growth for 2018 and 2019 is likely to be around 2 per cent per annum, below the accelerated 2.4% pace last year. Consumption is rising as jobs growth around 180,000 per month leads to higher incomes and elevated sentiment.

China’s pace of growth is slowing but remains impressive by global standards. A more significant growth slowdown that would drag global conditions through lower commodity prices and business sentiment is less likely now. The pace of infrastructure investment should slow but not collapse given various government projects including the “Belt and Road” initiative which aims to boost connectivity between China and Asia, Europe and North Africa.  Chinese services activity should continue to be propelled by rising household wealth and income and ongoing urban property investment.

Japan is likely to grow GDP around 1.1% per annum in 2018 and 2019 assisted by improving consumption and capital expenditures. Retail spending has slipped back to anaemic levels following strength last year. However, rising incomes and elevated consumer confidence points to some gain in momentum particularly ahead of the Olympics.

Inflation and interest rates: modest, but on the rise

We are more concerned about the value of long-term bonds than stocks. Markets are underappreciating the gradual rise in inflation and interest rates over time. Bond investors are not being adequately compensated for the risk of holding securities with a long date to maturity. Yields on long bonds are likely to rise faster than those at the short end as general price increases become more evident.

Market adjustment to higher interest rates will likely come next year. For now, the upswing in corporate earnings and modest prevailing inflation is assisting asset price appreciation. The globe is becoming increasingly indebted. As global central banks reduce monetary stimulus, rising borrowing costs will become an increasing problem for households, corporates and governments. As more funds are applied to servicing debt obligations, less will be available for investment and this will weigh on economic activity.

The US is more advanced in its cycle than other economies. There, inflationary pressures are building through tightening labour markets and higher commodity prices. The 25 per cent lift in oil prices in the last few months will add to upward price momentum. Late-cycle stimulatory tax cuts and increased government spending also supports US inflation.

Monetary policy remains accommodative. The fact that inflation is low by historic standards means financial conditions should continue to be tightened at a modest pace. The US Federal Reserve is likely to raise rates by 25 basis points five or six more times in the next 18 months—more than markets expect. The US Federal Reserve will be keen to restrict the potential for a wages breakout and it is also keen to build a war chest to help fight the next downturn. Other key central banks have yet to commence what will be a long path of unwinding stimulatory settings.

There is evidence of a more robust uplift in US wages-led inflation. US core PCE inflation is now at the US Federal Reserve’s target of 2 per cent, the first time in six years. Employees typically quit their job to move to a higher paying job. A rise in Quits to Separations indicates upward momentum in wages. Quits to Separations has recently spiked to 63 per cent, well above the 54 per cent average since 2001. (Separations are all employees that separated from the payroll during the month. Quits are employees that left voluntarily.)

Chart 1: US non-farm quits to separations 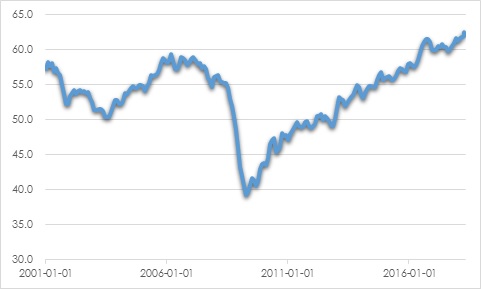 The pool of available skilled labour in the US is shrinking. Job openings of 6.6 million now exceed the 6.1 million job seekers. The price of any product typically rises when demand outstrips supply-- eventually. 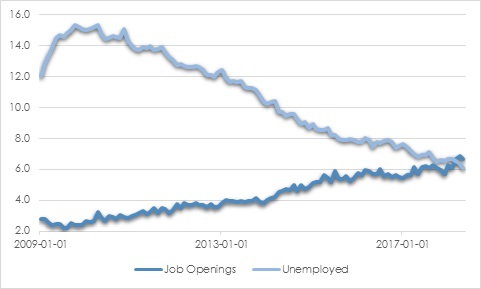 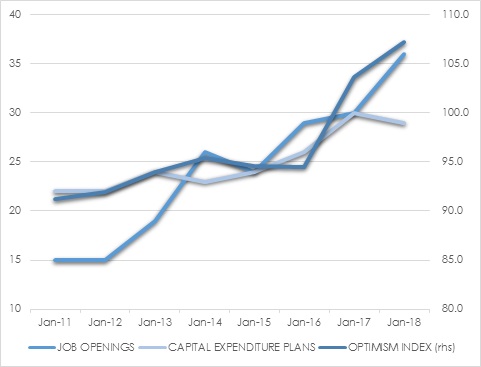 Growth of new jobs per month has rebounded in recent months, back above 200 thousand per month after sliding since 2014. US labour force participation is rising as improved job opportunities entice more people back to the workforce. This cyclical recovery should slow over the next year as job creation wanes.

A bumpy outlook for bonds

Written by Andrew Doherty
Last Updated: 08 December 2022
Published: 17 August 2018
You need to be a member to post comments. Register for free today