Keep your cash at the ready

A potential rise in volatility in markets could provide SMSFs with an opportunity to snap up high-quality assets more cheaply where they have the available cash.

Global economic fundamentals remain reasonably healthy with each key region exhibiting solid mild expansion. The United States, however, is more advanced in its cycle than most and the pace of growth should slow somewhat through next year as interest rates rise and jobs growth slows.

Emerging markets overall are growing above the pace of the advanced world. China is maintaining impressive growth though still with a heavy reliance on debt that requires reckoning at some stage.

Companies across the globe are accepting revenue and earnings growth opportunities. Capital spending that may boost productivity and enhance potential growth rates is yet to rise substantially but should accelerate somewhat as the recovery progresses.

Trade conflict and protectionism more broadly has threatened the outlook but is yet to materially impact activity. Political rhetoric has typically been more menacing than eventual actions.

Inflation is gradually rising in most areas, as expected. US wages are now growing above 2.5 per cent per annum as the labour market tightens, feeding into broader price measures. Employment growth also remains a key driver in Europe and Japan but remaining slack means income growth is yet to respond significantly. Overall inflation will continue to be restrained by longer-term forces such as high global debt levels, automation, globalisation and ageing western world populations.

Fiscal policy is turning more expansionary. Most obvious is in the US where late cycle tax cuts and increased infrastructure spending will mean higher budget deficits and increased government borrowing. The US Federal Reserve, well into its tightening cycle, will need to lift rates somewhat higher as a result. Three more 25 basis-point hikes are likely this year ahead of another three or four in 2019. The European Central Bank is likely to keep ultra-low deposit rates on hold until mid-2019 but will start to reduce the scale of asset purchases from late this year.

Credit spreads remain tight and defaults relatively low. While we expect these conditions to change, they are indications the cycle has further to run. Continued tightening by the US Federal Reserve is likely to end in recession, but probably not before early 2020 after the tax cut impulse eases.

Australian GDP growth is likely to modestly accelerate to around 3 per cent for 2018 and 2019. The rise in commodity prices is reawakening activity in some areas. A likely softening in the Australian dollar, particularly as US rates rise further, should assist tourism and education exports. Above-average business conditions and confidence point to further expansion in jobs and investment.

Consumption should gain momentum helped by improving job prospects and personal income tax cuts. Wages growth at around 2 per cent per annum, should continue to rise, particularly if commodity prices hold up. With unemployment at 5.5 per cent, there is capacity for jobs to keep growing at a monthly pace of around 20,000 for at least the next two years.

The United States economy is likely to accelerate during the remainder of the year after a soft first quarter dragged by seasonal factors and adverse weather. Interest rates and inflation are modestly higher, but still low by historic standards. We anticipate GDP growth of 2.9 per cent for calendar 2018, slowing to 2.7 per cent in 2019 as tighter financial conditions and slowing jobs creation weigh somewhat.

Corporate-friendly conditions are reflected in US first quarter earnings which rose as much as 25 per cent year-on-year for S&P500 companies according to FactSet. This is the sharpest pace since 2010. Enhanced revenue opportunities are encouraging a modest rise in capital expenditures which may enhance productivity and extend the length of this cycle. Capital expenditure as per cent of GDP continues to rise despite trade uncertainty holding some companies back. 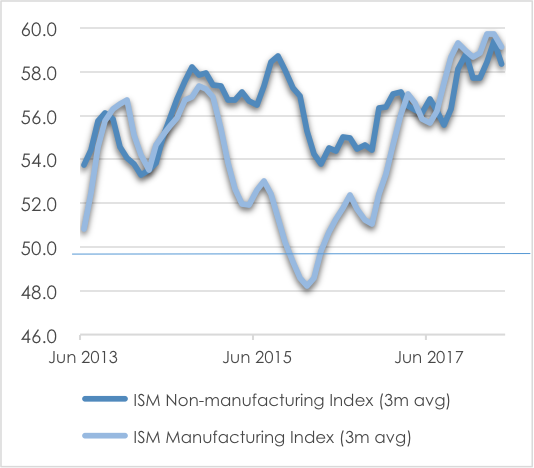 US Federal Reserve policy is set to be the source of further asset price volatility. The steady upward rates trajectory will continue while robust activity demonstrates that a highly accommodative stance is no longer needed. The Reserve also has a strong incentive to build up a buffer to help fight the next recession which we anticipate in early 2020.

Late-cycle tax cuts, increased infrastructure spending and rising commodity prices raise the likelihood of inflation rising beyond the US Federal Reserve’s 2 per cent target. With unemployment only 3.9 per cent and inflation rising, fiscal spending should typically be reined in to prevent an overheating in the economy. The federal funds rate will therefore need to be higher as a result.

European recovery continues, though growth has somewhat stagnated in recent months. We still expect Eurozone GDP growth of 2 per cent in each of the next two years.

Key supports for European growth include extremely accommodative monetary policy and a stronger banking system which is supporting activity through increased private sector lending. Lending to non-financial corporates is now growing at 2.2 per cent annually, the fastest pace since 2008 though still well below pre-global financial crisis levels.

Inflation’s stagnation around 1.2 per cent per annum as of April 2018 demonstrates the large amount of slack remaining in the region. The European Central Bank is unlikely to shift policy for some time yet particularly due to the rising risk of trade conflicts.

Unemployment remains high at around 8.5 per cent for the Eurozone despite improvement in recent years. Wages inflation remains subdued as a result. Jobs are being created at around 230,000 per month which has positive implications for household finances and consumption. Consumer sentiment remains elevated. 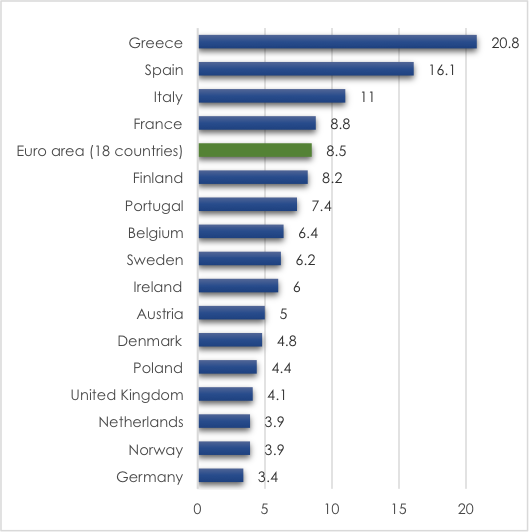 Equity valuations are broadly fairly valued, and we therefore have neutral exposures overall to equities. We continue to see more value in Japan where we are overweight and less value in the US where we are underweight. We are neutral to Europe and Australian equities.

Our individual company holdings are focused on relative value, high-quality and dividend growers as these are likely to outperform in the current climate. We have very limited exposure to so called “defensive” businesses such as those in telecommunications, consumer staples and utilities sectors. These are likely to underperform given their valuations, limited growth options and generally poor industry positioning.

We are overweight to cash mainly via our underweighting to bonds, and we also have elevated cash levels in our Australian equities portion. We stand ready to snap up opportunities to buy high-quality assets more cheaply should the market provide opportunities.

Key downside risks include a more significant rise in inflation than generally expected, policy errors as central banks unwind extraordinary monetary stimulus, a more dramatic growth slowdown in China and dysfunctional politics in Europe. Given the stage in the cycle, we would see these as equity-buying opportunities rather than bull-market-ending events.

Keep your cash at the ready

Written by Andrew Doherty
Last Updated: 08 December 2022
Published: 29 May 2018
You need to be a member to post comments. Register for free today