SMSF investors should focus on quality businesses benefiting from structural industry growth, given that meaningful selloffs are likely to be on the horizon.

Immediate conditions are conducive to positive returns from growth assets like shares and property. For now, corporate earnings are being lifted through improved economic activity, trade flows and commodity prices.

However, investors must be watchful of an easing in the pace of growth and an increasingly difficult backdrop. Meaningful selloffs are likely as the equity bull market ages. Markets will be surprised to discover that inflation in fact is not dead, as seems to be factored into the prices of most financial assets.

Emerging challenges include the possibility of higher than expected interest rates, moderating China growth and the slow but steady unwinding of extraordinary monetary stimulus.

We are underweight government bonds as yields should continue to rise and values fall with more inflation and less central bank purchasing.

Our share selections are focused on outstanding businesses benefiting from structural industry growth and an ability to pass cost increases on to customers. We prefer companies able to fund growth internally rather than rely on external financing which will be more expensive as interest rates rise.

We prefer markets that are earlier in the economic cycles than the US, namely Japan, Europe and Australia. These regions have substantial capacity for further growth and trade on more attractive multiples. With a greater weighting to cyclical companies they will also benefit from rising capital spending.

Empirical evidence and our own experience demonstrate that a focus on high-quality companies in equity portfolios is more likely to generate superior returns than other approaches.

Conditions for risk assets like shares and property are in a sweet spot. Global growth is the strongest and most synchronised for some years. Monetary policy remains highly accommodative despite commencement of tightening cycles in some areas, while fiscal stances are turning more expansionary. US tax cuts will provide meaningful fiscal stimulus in the next two years. Spending is also likely to rise in Germany and Japan, but France will be more restrictive should President Emmanuel Macron be successful in reducing the welfare state.

Global growth is likely to improve further in 2018. Expansions don’t die of old age but from a build up of imbalances that eventually unwind. Excess capacity is shrinking in the US but a long runway for growth remains in Europe and Japan where significant slack remains. Continued declines in unemployment fuel expanded consumption, which is the key driver of advanced economies. Emerging markets growth has reasonable momentum despite the likelihood of somewhat slower China expansion. Brazil and Russia have lifted out of recession, while India is rebounding from a reform-induced slowdown. 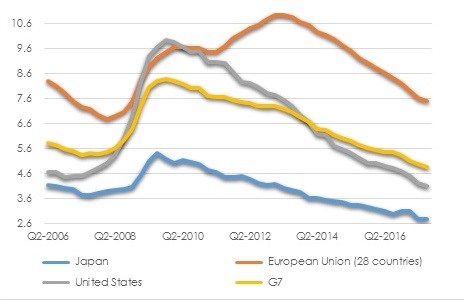 Positive momentum is displayed by elevated business and consumer sentiment in much of the wold. Purchasing Managers Index (PMI) data for services and manufacturing activity is above 50, indicating expansion for the US, Europe, Japan and China. Composite leading economic indicators (CLI), which are intended to provide early signals of turning points in economic cycles, remain positive. 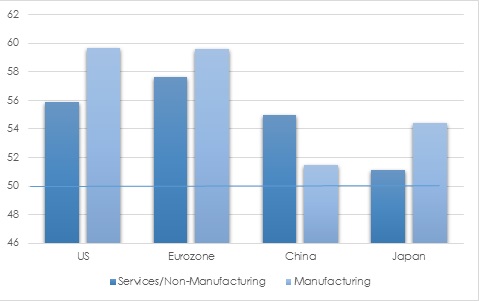 Inflation could surprise on the upside

Technology and demographics should keep inflation at a mild pace relative to historic averages. However, investors have become so accustomed to the idea that inflation will stay extremely low forever that even a mild upswing in prices could dramatically unsettle markets. Concerns that the US Federal Reserve will need to catch up through a faster pace of rate hikes would lift volatility.

The fall in US core inflation was a surprise through 2017. US core PCE inflation fell to 1.5 per cent in December 2017 from 1.8 per cent a year earlier. However, inflation tends to lag general economic activity by more than a year. US GDP slowed from late 2015 through 2016. The pick-up during 2017 should be reflected in inflation data heading back towards the 2 per cent level targeted by the US Federal Reserve.

With the US labour market nearly full, wages are likely to rise more significantly in 2018. Unemployment will decline below 4 per cent as solid jobs growth continues. Some 171,000 new jobs are being created per month, above the 110,000-long-term average rate. Unfilled job openings remain at a record high above 6 million, indicating a high level of demand but also a skills mismatch. Companies will increasingly need to pay up to attract qualified staff. An example of this is Walmart’s January 2018 hike of its starting wage to US$11 per hour from US$10 per hour, one-off bonus of up to US$1,000 plus improvements to other employee benefits.

The late-cycle timing of US tax cuts will encourage somewhat higher inflation and increased need for the US Federal Reserve to raise rates more than they otherwise would have. Longer term offsetting costs will be an increase in the budget deficit by over US$1 trillion over 10 years, higher interest burden, reduced public funds for productive investment and increased income inequality.

While the US is further ahead in the cycle, there are early signs of lifting inflation in other key regions, including Eurozone, Japan and Canada as labour markets tighten and spare capacity declines. Inflation has risen to 1.5 per cent in Europe and 1 per cent in Japan, assisted by modestly higher wages and producer prices. 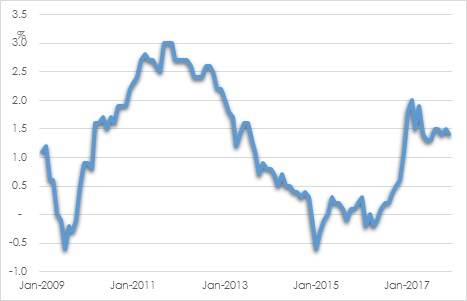 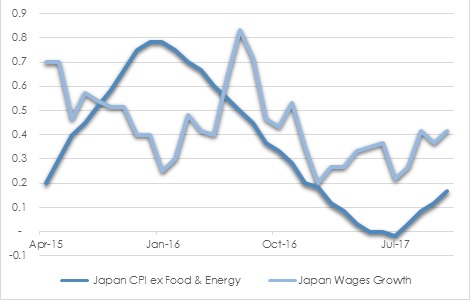 Manufacturing overcapacity in China has long been a source of deflationary pressure through low export prices, but this may be about to change. China producer prices have lifted since September 2016, demonstrating a strong economy, and this has supported state-owned enterprise profitability. Producer prices should hold up given the cuts to capacity in certain industries as part of broader government reforms. 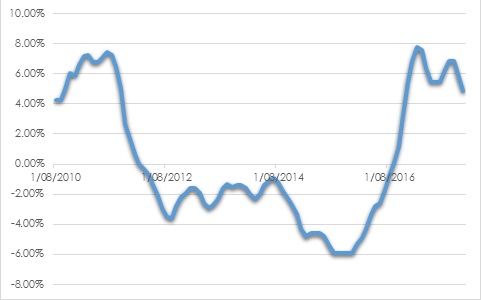 Monetary policy to be a source of uncertainty again this year

Shifting monetary policy and increasing divergence between key regions will be a source of uncertainty through 2018. Sell offs in asset prices are likely as removal of accommodation prompts markets to question the ability of economic expansion to justify current valuations.

Monetary settings are still stimulatory, but extraordinary accommodation is being steadily reduced. The US is removing liquidity, the banks of Canada and England have begun tightening cycles, and the European Central Bank will probably start unwinding extreme policy settings by the end of the year.

The US Federal Reserve is likely to raise rates three or possibly four times in 2018, more than market expects. It will be keen to slow an overheating employment market and rising inflation while also building a war chest ahead of the next downturn.

The market is only pricing in two hikes in 2018 and just one in 2019 whereas the dot plot guides set by US Federal Reserve members indicate three this year and a further three in 2019. The US Federal Reserve has been true to its guidance since December 2016, having raised the cash rate four times in that period. As 2018 progresses, the market will start to factor in higher inflation and a faster rate hike trajectory. Bond yields will rise in response.

The economy has enough momentum to manage these hikes, but further rises through 2019 will start to crimp activity. The US dollar should modestly rise in the second half of 2018 due to sharper rate rises than expected by the market.

Central bank asset purchases are slowly reducing. The removal of demand will be another feature allowing bond yields to lift over time. The US Federal Reserve will shed over US$300 billion in bonds in 2018. The European Central Bank will reduce the quantity of bonds it purchases to $30 billion per month in January 2018 from €60 billion, and should cease purchases completely by the end of the year.

The Bank of Japan is also reducing bond purchases but in a less publicised way. Average monthly asset purchases have fallen to US$24 billion from above US$85 billion in mid-2016. The Bank of Japan is still targeting a rate of 0 per cent for Japanese 10-year bonds, but this may be raised in a global environment of higher rates later this year.