2017 marks a significant shift in global policy settings. Since 2009 there has been a long era of extraordinary monetary stimulus through ultra-low or negative official interest rates coupled with the buying of bonds by central banks. Now, this monetary accommodation is being removed. The unwind is planned to be slow, steady and well telegraphed and will proceed in an environment of improving global economic fundamentals. However, the risk of policy misstep will increase with every new tightening decision.

Risks are finely balanced. The equity bull market continues but we are ever more watchful. Rising bond yields, commodity prices and emerging market asset prices are all signs that the equity bull market is ageing. There is increasing susceptibility to shocks particularly as full equity prices means the margin of safety we typically prefer is not available. The long period of ultra-low interest rates and rising asset prices could be encouraging excessive risk taking and the development of imbalances that may fracture with negative consequences.

Caution prevails in AssureInvest’s portfolio positioning. We are neutral overall to equities though we have built additional cash slowly and steadily over the past year. This cycle is elongated by the slow upward grind with remaining slack keeping inflation and interest rates relatively low compared with typically in the past. Several factors could prompt a spike in asset price volatility that would provide an opportunity to add to high quality assets at cheaper prices. These include the risk of policy misstep as extraordinary stimulus is unwound, adverse populist political moves or a temporary hiccup in China.

Within the equities asset class, we are underweight the United States which offers the least value and neutral Europe and Australia. We are overweight Japan where valuations are cheapest and the markets are underestimating the likely pickup in earnings this year.

Australian bonds are more expensive than equities and we are underweight the asset class in favour of additional cash. We think markets will be surprised by the rise in inflation and bond yields over the next couple of years even though structural factors cap the upside of both.

The global economic recovery looks increasingly assured and widespread. All the G20 economies are likely to grow this year, the first time this has occurred since 2010. China growth continues to be a key driver. Global GDP should grow by 3.1 per cent in 2017 rising to 3.6 per cent in 2018. Fiscal support will increase modestly, including through likely tax cuts in the United States.

Improving global growth somewhat allays concerns over elevated asset prices and provides some leeway for central banks to partially unwind quantitative easing measures. Inflation is rising only modestly and remains below targeted levels so monetary policy will remain accommodative for a while yet, unwinding at a glacial pace.

Expansions do not have a fixed time limit and the present slow upward grind with continuing high levels of slack is conducive to a more elongated cycle than usual. Downturns typically originate from the build-up of excesses and inflation that prompts hefty official interest rate increases. These conditions do not exist at present.

A significant shift toward protectionism could disrupt the recovery and send the globe into recession but this appears less likely. A US trade war with China is improbable while the need to co-ordinate to tackle the North Korean threat persists. Populism remains a significant force in Europe, but the economic impacts appear reasonably contained. The strong right-wing party support reflected in the latest German elections will encourage Angela Merkel to aim to stop the rise of protest votes by pursuing growth measures at the expense of closer political and fiscal union across Europe. Italian elections in the first half of 2018 are a key flashpoint but threats to stability have declined since the anti-Europe parties have backed away from calling for a referendum on exiting the European Union.

Accelerating US activity is seen in Institute of Supply Management (ISM) manufacturing index to be the highest since 2014 and non-manufacturing activity the strongest since 2015. Manufacturers’ new orders also continue to lift allowing increased use of spare capacity. 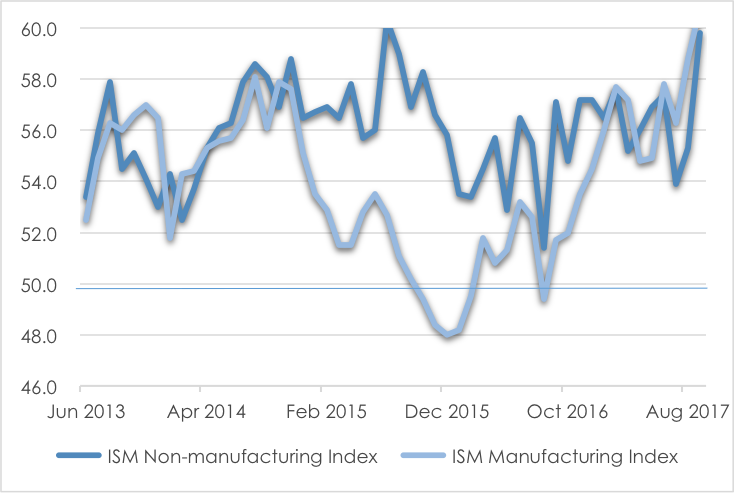 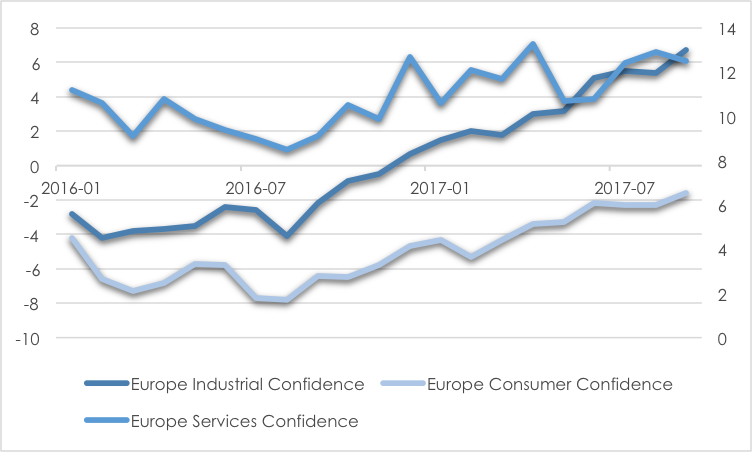 Japanese GDP has now expanded for six consecutive quarters. There are likely to be upside surprises in growth and inflation over the next year. Consumption, capital expenditure and exports are all providing modest positive contributions to activity.

Japanese corporate profits have continued to rise solidly and well in advance of sales. Moderate global demand growth for manufactured goods and information technology along with yen depreciation and only modest wage rises are assisting margin gains. 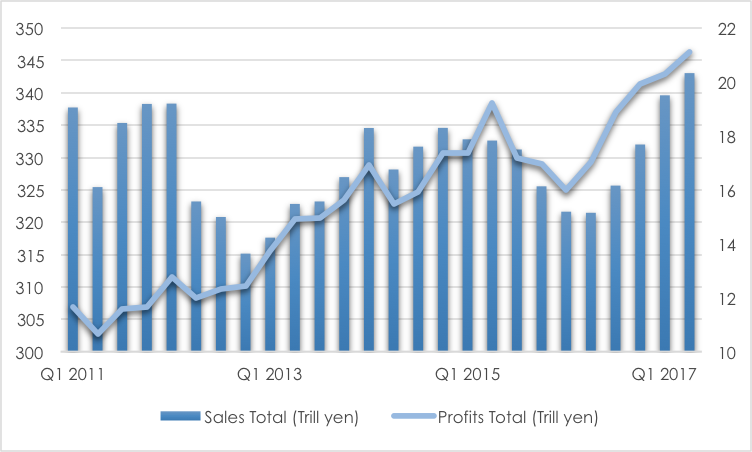 The strong October election win by Prime Minister Shinzo Abe’s coalition party helps secure a mandate for the three-arrow policy of fiscal stimulus, monetary stimulus and structural reform. It is now more likely that the Bank of Japan’s programs of asset purchases and yield curve control will continue for an extended period. Bank of Japan’s Governor Haruhiko Kuroda is likely to be reappointed in April next year, ensuring continuity.

Removal of extreme monetary stimulus is likely to be the source of intermittent financial market distress given the risks of policy misstep. The US, Canada and United Kingdom are each likely to hike rates this year. Rates in Europe are likely on hold possibly until 2019 however. The composition of the US Federal Reserve board is likely to change in the next few months, but the new members are unlikely to stray significantly from the existing policy normalisation plan.

Inflation is unlikely to jump significantly, but is still likely to rise faster than markets expect. Central banks will be spurred on to further reduce monetary accommodation. Over time wage pressures will rise as labour markets tighten and this will feed into broader inflation data, initially rents.

AssureInvest expects the US Federal Reserve to raise rates again in December 2017 and three more times in 2018. It will also now start gradually reducing the size of its balance sheet by not reinvesting all maturing US treasuries and mortgage-backed securities it owns on maturity to the value of US$10 billion per month, rising to US$50 billion per month in a year.

Core inflation in Europe has increased slightly. September’s reading was 1.1 per cent, compared to 0.8 per cent a year earlier. It will probably remain below the 2 per cent European Central Bank target for some time yet. The European Central Bank is likely to keep extraordinarily low interest rates unchanged through 2018 ahead of initial hikes in 2019. Bonds will continue to be purchased but at a rate of 30 billion euros per month, down from 60 billion euros, through to September 2018. The program will probably continue at a further reduced pace for some months thereafter.

Written by Andrew Doherty
Last Updated: 08 December 2022
Published: 03 November 2017
You need to be a member to post comments. Register for free today