With around half of SMSF trustees now in pension phase, it’s worth exploring the options for building a liquid, low-risk, defensive portfolio.

It is easy for SMSF practitioners and their clients to forget past financial crises and their impact on investments. During previous financial crises, some mainstream asset classes suffered liquidity freezes and became inaccessible for investors to redeem or exit. Other similarly marketed investments experienced dramatic re-pricing or asset price volatility. These experiences should be etched into the minds of SMSF practitioners and their clients as they consider a ‘defensive’ allocation within a diversified portfolio.

Defensive investments have assumed greater prominence for investors given current global macroeconomic developments and subsequent reactions following the global financial crisis. Since the GFC, public and private debt levels have exploded while central bank intervention and political discourse characterised by nationalistic and protectionist policies have conspired to decrease stability across financial markets. It is against this backdrop that many industry observers are anticipating continued bouts of investment market volatility.

History suggests that having true to label defensive exposures can help diversify portfolios to withstand periods of financial market stress or downturns. Defensive assets can offer protection and moderate portfolio fluctuations by behaving both counter-cyclically to risky assets as well as providing additional defensive ballast during market downturns. In this regard, the higher the quality of the defensive exposure included in portfolios, the better the level of diversification and defensive protection there will be during periods of market stress and volatility.

True defensiveness, Australian government bonds – getting back to basics

As a strategic holding, a blend of high-quality, liquid Australian government bonds can play a strong defensive role for SMSF investors across all market environments.

The defensive features of Australian government bonds are a direct result of issuer strength, instrument design and healthy dynamics.

For an SMSF investor, the benefits of an Australian government bond can be:

Government bonds deliver material diversification benefits to portfolios given their typically low and negative correlation to other traditional asset classes. As an example (see figure 1 below), the rolling five-year correlations since 1876 between 10-year US Treasury bonds versus the local US share market (the S&P 500) averages around 0.07. While correlations have fluctuated over time, the standard levels recorded over this lengthy period remain well below 1. This highlights the significant diversification benefits of holding US Treasuries (i.e. the US equivalent of Australian Commonwealth Government Bonds) relative to the more risky equities allocations. Put another way, the performance behaviour of government bonds has generally little relationship to that of equities which helps smooth portfolio returns.

Figure 1: Government bonds play a role as an effective diversifier five-year rolling correlations: US Treasuries and the US equity market 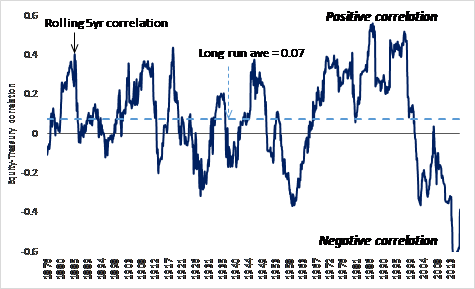 A source of defensive liquidity, a reliable income source and lower default risk

With around half of SMSF investors being in pension phase (according to the June 2016 SMSF Statistical Report), a liquid, low-risk, defensive portfolio allocation to Australian government bonds is a sensible place to start.

Liquidity levels represent the ability to sell an investment at fair value and on a moment’s notice. Considering the ACGS market’s size (at A$446 billion as at September 2016) and range of participants who transact in this space – including domestic and international financial institutions and central banks – the depth and appetite of investors for this asset class becomes readily apparent. In this sense, owning a selected mix of high-quality, liquid government bonds provides an investor with the option to easily and quickly liquidate holdings.

Default risk relates to the chance that a bond issuer will not be able to make required coupon or principal payments to investors. As can be seen in figure two below, Australian government bonds offer the highest credit quality with correspondingly low default risk compared to all other securities across the fixed income spectrum. 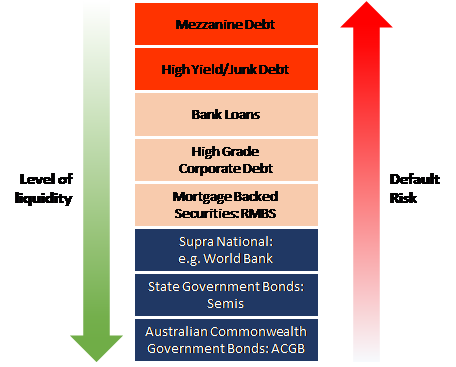 According to the ATO’s June 2016 SMSF Statistical Report, the average SMSF allocation to cash/term deposits at Australian banks was around 27 per cent. This represents a substantial portion of SMSF investors’ portfolios that are allocated to an investment that is primarily designed for ‘savings’ only, as opposed to an ‘investment’ per se.

While cash can be an option to achieve specific shorter-term objectives (i.e. savings and a store of liquidity), government bonds can offer both liquidity and a premium over cash returns over longer time frames, at the same time also offering defensive attributes to portfolios. Therefore, Australian government bonds provide a worthy liquid investment option for SMSF investors.

Figure 3 below illustrates a scenario where an investor may have exited equities and invested in cash from October 2007 to November 2016, returning +3.92 per cent per annum. Considering the turmoil of the period, this is a reasonable outcome. In contrast, another investor who also exited equities but instead invested in Australian government bonds, would have returned +6.09% per annum, a +2.17 per cent per annum premium versus cash.

Figure 3: Cash vs Australian government bonds – the difference between a savings and investment vehicle outcome 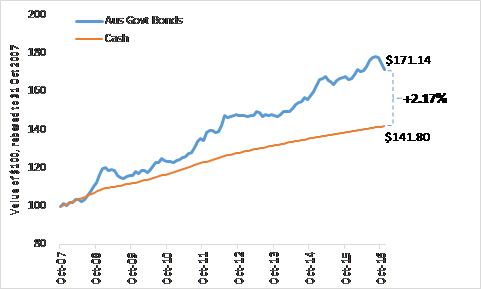 By contrast, Australian shares suffered sharp negative returns around the period of the GFC from November 2007 to March 2009. During this period, the Australian share market (S&P/ASX 300 Accumulation Index) declined by -41.1 per cent. In significant drawdowns such as this period, the negative correlation and liquidity in Australian government bonds should provide SMSF investors with the opportunity to re-balance a well-diversified portfolio.

The investment environment continues to be characterised by heightened macroeconomic uncertainty and market volatility. Holding passive (i.e. index) government bond market exposure is not the best way to access this defensive part of the fixed income market, as outlined further below:

Successful SMSF investing involves balancing a number of investment priorities, including longer-term objectives, return expectations, risk management and diversification. Focusing exclusively on any one attribute can lead to an imbalance of risk in portfolios and potentially other issues such as liquidity, income and return. Taking a long-term approach to asset allocation can also be helpful in avoiding the mistakes of sub-optimal investment decisions.  Understanding the behaviour of true to label defensive asset classes can bear fruit for SMSF investors over the long term. 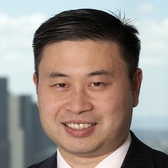 Written by Paul Chin
Last Updated: 08 December 2022
Published: 24 February 2017
You need to be a member to post comments. Register for free today