Top investment themes for your clients in 2017

Political changes and their impact on economies and markets will again be at the forefront of your clients’ minds this year, but which changes will help returns on assets and which will hinder them?

Volatility in asset prices is likely to be higher than experienced in the recent past. Risks are heightened through the prospects for tighter monetary policy, strained or altered trade and geopolitical relations and the prospect that new measures in Washington might disappoint market expectations.

The uncertainty we are experiencing helps us concentrate on what matters to us most. For investment portfolios, this is capital security and robust returns over time. Through it all, the environment is still reasonably favourable for equities due to continuing global economic growth, low inflation, expansionary monetary policy and the shift to greater fiscal support.

Share valuations are reasonably full, however, so we have neutral weighting to the equities asset class. US equities are stretched and we see better value in other key regional markets. Bonds are likely to underperform cash as inflation moderately rises over time.

In this time of extraordinary change, we publish here our top six investment themes for investors in 2017 and beyond.

The equity bull market that commenced in 2009 has further to go despite the rise in prices in recent months. Anchored inflation, accommodative monetary policy and the shift toward an easier fiscal stance provides a supportive environment for equities. Any near-term sell-off in share prices would be an opportunity to add to positions.

Continued economic expansion which supports rising corporate earnings is central to a constructive view on equities. In fact, we expect slightly stronger global growth this year despite the uncertainties. GDP growth will improve in the US and Europe while in Japan the weak but positive pace will be maintained. China should maintain its position as the globe’s fastest-growing major economy, but the pace is likely to ease somewhat.

Recessions typically follow periods of overheating and aggressive monetary tightening, however, and it would not be until later next year that these conditions might prevail. Sharp downturns in Europe or China that might halt global growth are low probability outcomes, at least for this year.

Equity prices are by no means cheap, however, and the smaller margin of safety necessitates more conservative portfolio settings. Returns are likely to be positive but lower than typical. The US equity market in particular appears stretched to us offering little leeway for negative surprises, not the least of which is the potential for US policy to fall short of expectations. Better value is available in other regions.

Inflation to surprise on the upside

Inflation is likely to rise more sharply than many investors expect despite being anchored at relatively low levels compared to historical averages by a range of longer-term forces.

Deflationary forces are dissipating following the part-rebound in commodity prices and the slow using up of excess capacity as employment rises through the western world. Developed economy growth is improving slightly while several emerging economies are making their way out of recession. The shift toward looser fiscal policy is likely to have more positive than negative implications for growth and inflation. 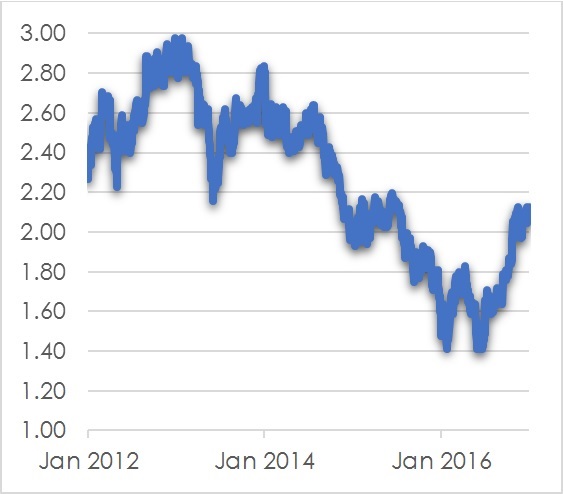 Employment growth is the critical element in inflation forecasts through the eventual positive impetus for wage rises. Unemployment continues to decline across global economies, having dropped significantly since 2008. Robust wages growth is established in the US where average hourly earnings are now growing by 2.9 per cent. More significant fiscal action could support upward pressure on wages. Infrastructure projects in the US are likely to commence in 2018 in a tighter labour market. Elsewhere, wages growth is being suppressed by continuing high unemployment in Europe and the greater share of the new jobs being created in less productive services roles in Japan. 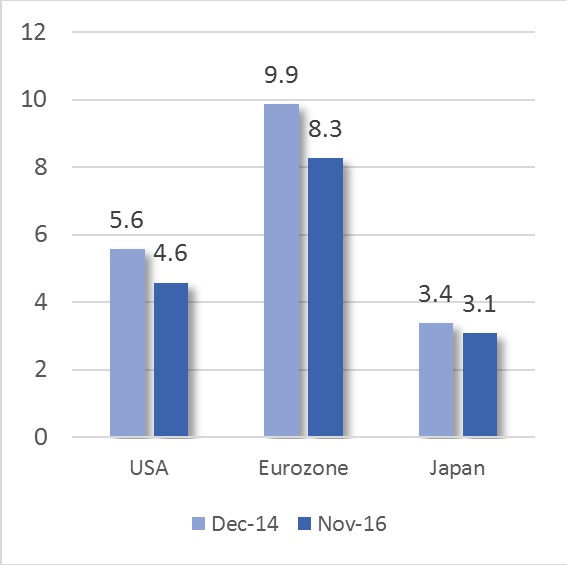 Inflation could surprise on the upside if commodity prices or US wages were to jump higher, fiscal expansion was more aggressive than expected or trade wars and anti-immigration policies disrupt markets. Inflation could surprise on the downside if capacity surpluses proved resilient, oil supply increased meaningfully or a sharply higher US dollar caused a downturn in emerging markets and a slowing of US activity.

Too many investors remain fixated on a deflationary trend that is now dissipating. While maintaining our bias to high quality, over the past year we have repositioned portfolios to benefit from the modest rise in inflation. Our equity portfolios have more of a tilt toward cyclical companies and less to high yield, low-growth businesses like utilities, telecommunications and real-estate investment trusts. Bond yields have been rising since the middle of 2016 and there is more to go.

The trend to increased fiscal support, or at least less fiscal austerity, stems from evidence that monetary policy is becoming less effective, a rise in populist politics and the prevalence of low interest rates which reduces the costs of funding policy actions. Being politically contrived, there is a risk that some of the measures will have less than optimal economic outcomes but the overall impact on activity is likely to be rather more positive than negative.

Fiscal stimulus in the US is likely to be significant in the next few years given Republican control of the three arms of US government. Tax cuts, fiscal spending and regulatory reform, offset by the likely rise in currency, interest rates and inflation, are likely to add 0.5 per cent per annum to US GDP from 2018. The changes will take time to implement, so there should be little impact in 2017.

There has already been a positive flow-on effect to consumer and small business confidence. NFIB Small Business Optimism came in at 105.8 in December 2016, up from 98.4 in November. Small business hiring intentions are also positive. There is also a rise in small business capital spending intentions which could add to sustainable growth and help to lift productivity. 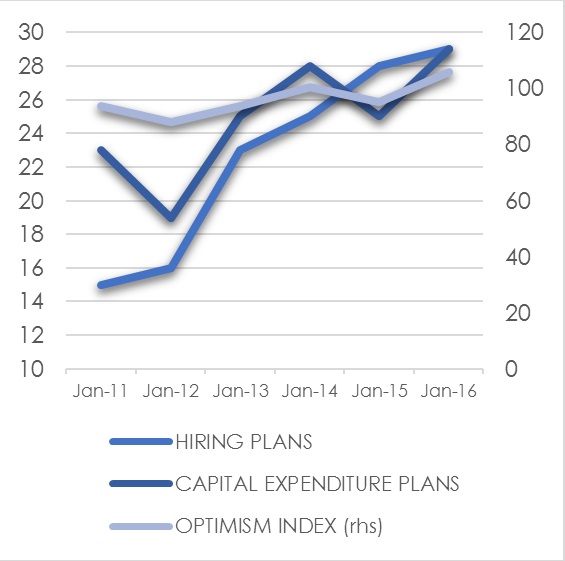 Fiscal expansion in the US is likely to encourage other governments to follow similar paths. However, a number will be constrained by existing high debt levels and weak fiscal positions. Europe is likely to loosen fiscal policy ahead of key elections this year and increasing influence of populist parties like the French National Front that is calling for lower taxes, among other measures.

Japan is likely to push through additional stimulus to maintain momentum following its budgetary measures in the second half of 2016.

Monetary policy has become less effective as global rates approached and passed through zero. Modestly rising global growth and inflation, in tandem with a shift toward easier fiscal policy, allows international activity to be less reliant on monetary accommodation.

The US Federal Reserve is likely to continue the gradual normalising of interest rates it has pursued over the last two years, though the pace will quicken through 2017. Two or three rate hikes are likely.

Maintenance of financial market stability will continue to factor on rates decisions particularly while US policy is divergent from Europe and Japan. Higher US rates could prompt rapid US dollar appreciation which would weigh on the ability of emerging economies to repay US dollar debts. The US Federal Reserve could well hold back on hikes ahead of European events this year, especially the April-May French presidential election. An unlikely victory by the National Front’s Marine Le Pen could help to initiate a process of removing France from the eurozone. Rising US wages and inflation momentum would require at catch up on rate rises from mid-year.

The need for extraordinary monetary policy measures is declining as deflationary forces diminish, the negative effects of ultra-low interest rates become clearer and fiscal policy becomes more stimulatory. Europe is likely to maintain negative short-term interest rates while tapering and eventually ceasing its bond purchase program potentially by the end of the year.

A growing anti-establishment and anti-globalisation sentiment is reflected in the 2016 Trump presidential election and British decision to leave the European Union. Politics will prompt greater than usual investor attention again this year. Key events include Dutch, French and German elections. Early elections in the United Kingdom and Italy are also possible.

Local grievances and the popularity of anti-establishment parties have been gaining momentum as the ability of governments and central banks to alter individuals’ financial lives for the better has been increasingly questioned. Globalisation has been blamed for the slow economic growth and increased inequality since the global financial crisis.

Trump’s presidential election introduces potentially significant changes to US foreign, security and defence policy over which the American president has significant influence. Key alliances such as NATO and US-Japan could shift. US-China relations already appear more volatile after a long period of stability.

The anti-globalisation wave might slow trade but a collapse is unlikely as the cost and quality benefits of global sourcing for companies and consumers will remain high. The extensive real-life business experience of the members of the Trump administration indicate that a pragmatic approach will be taken, thereby reducing the likelihood of trade wars per se.

The march of globalisation will continue but for a time politics could create a more inward-looking stance with looser fiscal policy to boost jobs and equality. In Europe, populist parties may not win outright in any of the key elections this year but their anti-European and anti-immigration policies may gain greater influence.

Emerging markets have been an important source of recent global growth. The impact of changed internal and external economic forces on this segment have important implications for the investment outlook. Growth may be more challenged under the evolving landscape.

Improved advanced economy growth and the shift toward looser fiscal policy have positive implications for commodities and other emerging market product demand and pricing. However, risks emanating from any rapid rise in US dollar and interest rates could prompt further capital outflows and make US dollar debt harder to support. Countries more reliant on trade will be most impacted by any anti-globalisation policies.

China, the world’s largest emerging economy and second largest overall, is likely to encourage further fixed-asset investment to maintain targeted growth levels. The strong rise in retail and services spending is testament to the impressive shift toward consumption from investment-led growth. The fact that credit is being allowed to expand so rapidly is cause for concern despite the high savings rate and government control of much of the economy. There will need to be a reckoning at some point, at least via slower longer-term growth. Maintaining positive momentum is the government’s priority for now.

Top investment themes for your clients in 2017

Written by Andrew Doherty
Last Updated: 08 December 2022
Published: 27 January 2017
You need to be a member to post comments. Register for free today