Preparing your clients’ portfolios for an ageing bull market

Political uncertainty, high global debt levels and the declining impact of monetary policy could see a series of market sell-offs in the short-term.

A constructive environment for growth assets like shares and property is supported by modest global economic expansion, accommodative monetary policy and increasing fiscal support. However, several risks cloud the outlook so it may be worth positioning your clients’ portfolio towards more conservative assets.

The equities bull market that commenced in 2009 continues, but the cycle is maturing. There is likely to be a series of market sell-offs over the next period which will offer opportunities to add to growth-asset positions more cheaply. In readiness, you may want to build cash buffers in your clients’ portfolios.

Emerging market growth is becoming more important to global conditions as large emerging markets like China and India continue to expand at well above average rates. Emerging economies are recovering as recessions recede now commodity prices are bouncing and the US dollar is not appreciating like it was in 2015, stressing US dollar indebted corporates and sovereigns. The likelihood of low developed market interest rates for an extended period creates a more benign environment for emerging market growth. The path of US rate rises appears more modest than it did a year ago.

In the US, the sharp rise in September 2016 manufacturing and services activity after a period of weakness indicates the economy is gaining momentum as the year progresses. Services activity, the bulk of the economy, continues robust growth. Manufacturing has returned to growth after a period of contraction relating to weakness in the energy sector and dampened external sector following the 2015 rise in the US dollar.

CHART 1: EXPANDING US SERVICES AND MANUFACTURING 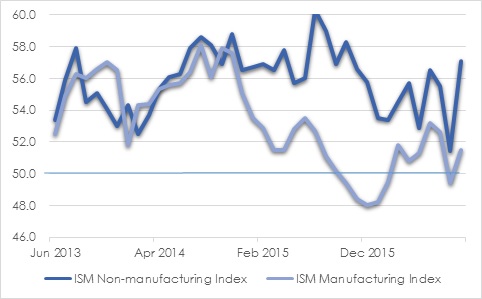 US retail sales growth remains subdued but there is improvement from earlier this year. Wages growth at faster than usual rates and elevated consumer sentiment point to robust spending over the next year. Employment growth continues at an above average but slightly slowing pace of 180,000 per month. More people are entering the workforce as positions become available. A growing participation rate, especially among the critical 25-54 age group, extends the length of this expansion cycle. 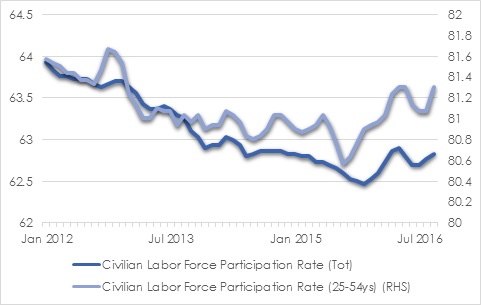 It will be difficult for Europe to break above its current very mild GDP growth rate despite the part-revival in commodity prices and expansionary monetary policy. Uncertainty relating to the UK’s potential exit from the European Union is likely to weigh on conditions.

Consumption measures remain supportive, assisted by stimulus measures. Employment growth of around 180,000 per month is the highest since the financial crisis. Unemployment remains high but has declined in the last two years in most countries. Consumer sentiment remains above typical levels pointing to increased spending. 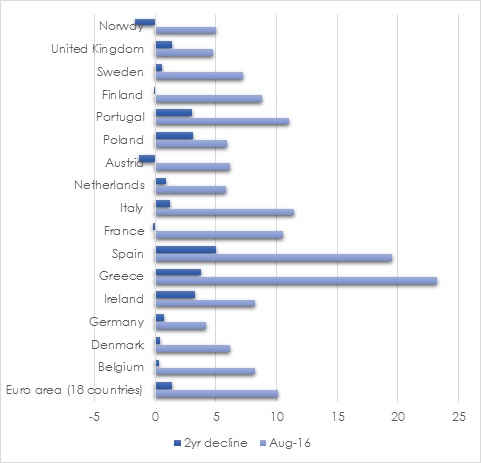 Global inflation is likely to continue to rise modestly as fuel prices lift and activity increases. However, price rises will remain below target levels in Europe and Japan for some time yet, maintaining pressure on central banks to act.

Extraordinary monetary stimulus has assisted the economic recovery as low interest rates have lifted asset prices and stimulated demand as asset owners feel more wealthy and raise spending. However, there are signs that benefits of additional monetary expansion in Europe and Japan are beginning to decline. The inadvertent costs of ultra low or negative interest rates are becoming more obvious, such as through the drain on bank and insurance business profits and exacerbation of defined benefit pension deficits.

Extraordinary stimulus and ultra low interest rates have benefitted investors, who gain from higher property and share prices, over savers, who are trying to get by on low deposit interest rates. The financial market distortions have helped broaden income inequality and assisted the rise in populist politics, seen for example in Brexit and the US presidential campaign.

The Bank of Japan appears to be attempting to address the problems that flat yield curves pose for banks by shifting policy in September to target 0 per cent yield on 10-year Japanese government bonds. It is not apparent how the Bank of Japan will stop the 10-year yield from falling below 0 per cent however.

Companies must deliver earnings growth to justify reasonably full share prices and we expect in these conditions they will. SMSF practitioners should encourage their clients to hold equity exposures around their neutral allocation, exact proportion depending on their risk tolerance and investment goals.

Practitioners should advise caution with US equities which are the most expensive major global market. Europe and Japan may be a better option for clients with both regions cheaper and benefitting from forthcoming stimulus. Japan offers the most value internationally and we expect growth to beat very low expectations through improving housing, consumption and tourism. In terms of Australian equities, the fundamentals are broadly reflected in market prices.

The recent sharp sell-off in bonds demonstrates the dangers for SMSF clients who incessantly ignore valuation in the hunt for yield. SMSF practitioners should encourage cash investments with clients over bonds, with bond yields unsustainably low. Yields are likely to rise further as inflation surprises modestly on the upside, the US Federal Reserve raises rates more than expected, and European and Japanese central banks wind back extraordinary stimulus measures. A shift to more attractive levels is now within sight.

As for direct equity holdings, selectivity of investments is increasingly important in this aging bull market with little outright value on offer. Positive yet mild economic growth means that dividends will provide more of shareholder returns. SMSF practitioners should help clients focus on uniquely positioned businesses delivering sustained earnings growth and rising dividends. Bond yields will increase from historically low levels in coming years and high-yield, no-growth companies will suffer as investors shift back to bonds and cash. Domestically-focused businesses will benefit from Australian economic growth that is faster than many developed economies and modest appreciation of the Australian dollar. As always, competitively well-positioned, scalable, cash-generative franchises with global growth potential remain attractive as SMSF assets.

Preparing your clients’ portfolios for an ageing bull market

Written by Andrew Doherty
Last Updated: 08 December 2022
Published: 26 October 2016
You need to be a member to post comments. Register for free today