Strategies involving the creation of a large revenue loss are often sold as a method of providing significant tax savings to the next generation. However, they do not always factor in the interaction of ECPI.

The interaction between exempt current pension income (ECPI) and carried forward tax losses is not necessarily simple for funds with members in pension phase. The ATO is examining whether SMSFs are appropriately carrying forward tax losses, correctly apportioning expenses and factoring in net ECPI when they are partly in pension phase. The minutes of the Losses and CGT Subcommittee meeting in November 2012 highlights that this area has been a focus of compliance activities. In response, the ATO published a fact sheet titled Self-managed super funds and tax exemptions on pension assets.

There are planning strategies that involve creating large revenue losses in one year. For example, losses created by anti-detriment payments and utilising the future service liability claim option for insurance, which are carried forward and used to offset the fund’s assessable income in subsequent years. Often these strategies do not take into account the reduced tax effectiveness of a brought forward tax loss if the fund derives sufficient ECPI to reduce the loss. To quantify the actual tax benefit of the strategy, advisers must be careful to look beyond the year in which the payment is made.

Can an SMSF carry forward a tax loss?

An SMSF is a form of a trust and would normally have to satisfy the applicable tests in Schedule 2F of ITAA 1936 to carry forward a revenue loss. A complying superannuation fund in s45 of SISA, however, will be classified as an ‘excepted trust’ in s272-100(b) and will not be subject to the trust loss measures.

The Administrative Appeals Tribunal sought to determine in Payne’s Case whether a net exempt loss (excess of allowable deductions relating to exempt income over the exempt income) could be carried forward to the next financial year.

The advantage of this was a reduction in the net exempt income of the following year, which would in turn reduce the amount of tax loss that would be applied in that financial year.

The tribunal noted that under s36-10, a tax loss arises in any income year in which the taxpayer’s allowable deductions exceed the taxpayer’s assessable income, provided that excess also exceeds any net exempt income for the income year.

AXY SMSF earned $30,000 in interest and paid $200 in bank fees, while 30 per cent of the SMSF’s assets were held to provide for the SMSF’s current pension liabilities. It has $10,000 in tax losses carried forward from the previous year. This would be shown on the SMSF annual return as follows:

The losses used in this example refer to tax losses as opposed to capital losses. 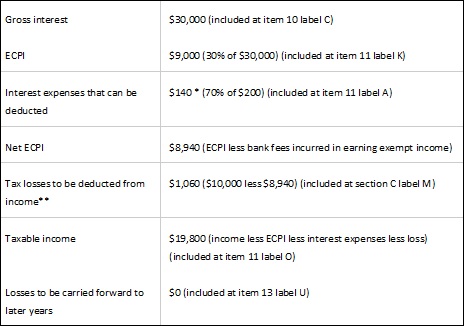 *The remaining bank fees of $60 (30 per cent of $200) cannot be claimed as a deduction because they were incurred in earning the exempt current pension income.

** Tax losses carried forward must be reduced by net ECPI before they can be offset against assessable income.

To summarise, the ATO will scrutinise funds with ECPI to ensure that tax losses carried forward are not over-claimed. Advisers must also be aware that the value of a tax loss may be significantly eroded by funds deriving sufficient net exempt income, which will reduce the loss and look to future years to assess their benefit.

Written by Wilson Tjoa
Last Updated: 08 December 2022
Published: 14 September 2016
You need to be a member to post comments. Register for free today