Now is the time to act on asset allocation

Changes in interest rates will disrupt several asset markets. SMSF practitioners should be reviewing their client’s allocations to assets that are interest rate sensitive now. 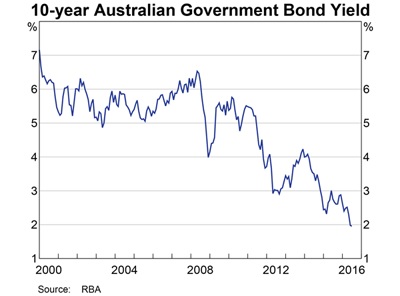 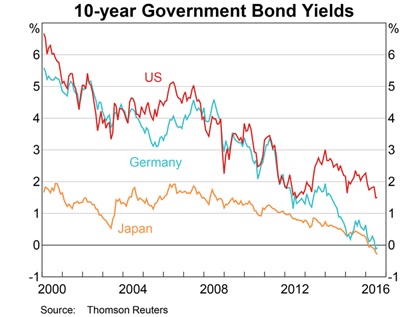 The Government Bond rates are important as they are considered safe assets, and are normally used as the ‘risk free’ rate of return when valuing other assets.

Falling interest rates have provided a tail wind to returns for investors in bonds, property trusts and infrastructure assets.

With this in mind we provide an extract from Platinum Asset Management chief investment officer Andrew Clifford:

“The bull market of recent years has been notable for the behaviour of investors who have been extremely risk averse.  This has been most notable in the bond markets.  We have seen huge positions built-up in negative yielding government bonds, with a flow through to fixed interest instruments of all kinds, and into the equity markets through the re-rating of low risk companies such as the US consumer staples, which have performed extraordinarily well in spite of low to non-existent growth in their businesses.  There is a crowding of investors into these perceived low risk assets, and I want to stress here ‘perceived’ low risk, because if you pay too high a price for a low risk asset you are changing the level of risk you take.   We do not think it makes sense to characterise a 10 year bond with a zero interest return as low risk.”

Clearly if long term interest rates rise, the ‘mark to market’ prices of bonds, particularly longer term bonds, fall.  By extension, there are several other assets whose price is closely linked to the bond market and are often referred to as ‘bond proxies’.  Infrastructure and listed property trusts come to mind and would likely suffer in a rising interest rate environment.

While it is impossible to predict when the interest rate cycle will turn, we are concerned that the current market price of ‘bond proxies’ are assuming that interest rates are not just lower for longer, but lower forever.  In other words, they would seem to be priced for perfection.

The final chart, sourced from Schroders highlights the distortion that is priced into markets by graphing the expected return of asset classes, versus the probability of loss (X axis). 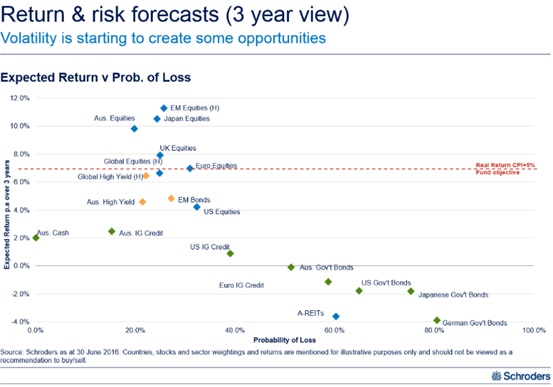 Now is the time to act on asset allocation