Budget a step in the right direction

True to its word, the government has made no changes to superannuation taxation in this Budget.

There appears to be a growing recognition that fiddling with superannuation raises uncertainty, undermines confidence and therefore reduces the effectiveness of such a long-term savings system and should not be part of the annual Budget cycle.

Although there is no doubt a difference in approach, Labor’s recent commitment to a 5-year moratorium suggests they also believe superannuation tax changes should be infrequent.

The objectives of the retirement system were clear when super was made more universal by the Hawke Labor Government and have been clear in all subsequent Government reviews. However, we agree with [David] Murray in his Financial System Inquiry that the objectives should be clarified and legislated. Our concern is that there is a clear campaign by left-wing think-tanks to re-write those objectives and shrink the superannuation system.

In this context it is encouraging that in this Budget, the Government has specifically acknowledged that the Age Pension is just one part of the three-pillar system – the part that acts as a safety-net for a minority of Australians. We welcome the Government’s pledge in the Budget that it will make no detrimental changes to superannuation taxation.

From the viewpoint of Australia’s retirement system, today’s Budget is a good step in the right direction – direction that should see a fairer and more sustainable retirement system in accordance with the principles of a three-pillar system.

This Government has declined to follow Labor’s recent, ill-conceived plan to add more taxes onto super.

On the other hand, the Government’s adjustment to the Age Pension test correctly recognises that the cost to the Budget of the Age Pension far exceeds the cost of superannuation tax concessions and that the Age Pension should be moved back to be the safety net it was always intended to be.

Superannuation tax concessions are a much better way to build an effective retirement income system as they comprise less than 10% of a super-funded pension, the far larger balance comprising an individual’s own savings and accrued income.

- Accumulated earnings on super during a working life and retirement; and

The value of tax concessions 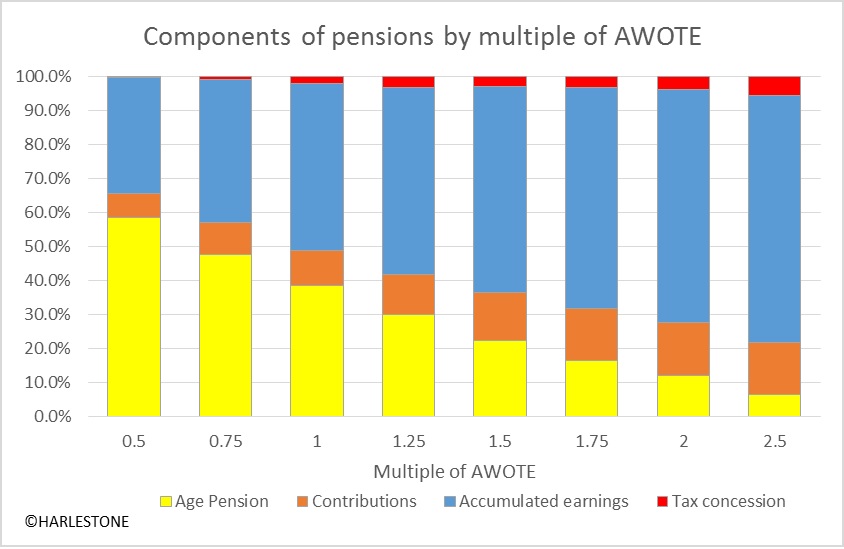 The important lessons from this graph are how small the tax concessions are (much less than 10% and far smaller than the cost of Age Pensions) and how large and significant the accumulated earnings are.

By waiting until the tax review process has been completed, this Government has shown a good understanding of the economic function of retirement systems, taking a measured approach to long-term reform of the superannuation system so that it becomes more effective for more Australians.

The benefit of a good superannuation system is that more people can retire on pensions that bear a closer relationship to their income during working life and at the same time result in Budget savings.

Even though the current system is not perfect, the savings in Age Pension costs vastly outweigh tax concessions to provide a net benefit to Government across all income levels. Our modelling shows that these costs actually reduce with rising income, contrary to some myths about super.

The following graph shows the total cost to the Budget of the retirement system per person for a range of incomes, over a lifetime, comprising the cost of the Age Pension plus the cost of super tax concessions. The graph shows this cost under the current system declining with rising income levels.

It also shows the costs if last year’s Budget measures of changing the basis of Age Pension indexation had been implemented, and it shows that under this year’s Budget, the cost of retirement per person should reduce even faster with rising income levels.

The main point is that tax concessions for superannuation produce better economic outcomes for the Government over a lifetime than Age Pension payments. 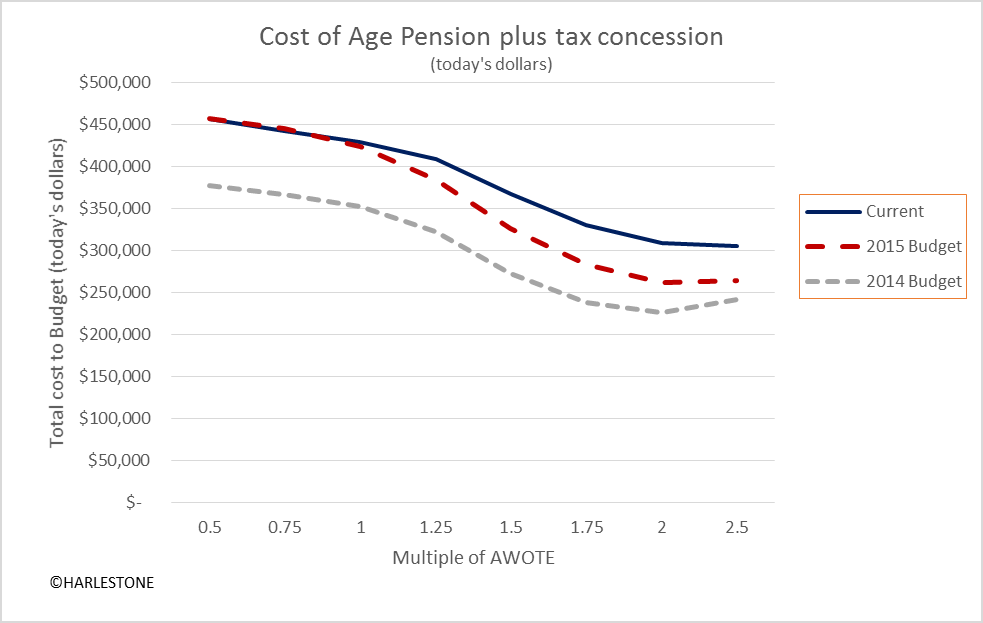 Sharpening the taper rate for the Age Pension eligibility assets test as per this year’s Budget is a justified and overdue first step towards the Age Pension being relied on primarily as a safety net. The above graph shows that this has a positive impact on the total cost to the Budget with respect to those on earnings equal to and above average weekly earnings.

However, we acknowledge that the superannuation system also needs to become simpler, fairer, better – to quote from the Government’s objectives for the Tax White Paper process currently underway.

We are developing detailed proposals to submit as a part of this process but the first graph above may provide some hint as to where improvements could be made. This shows that the largest component of someone’s retirement income is the accumulated earnings on their super. The compounding problem of high costs, high complexity and lower returns on someone’s superannuation balance was acknowledged as a major problem in Murray’s Financial System Inquiry and our submission to the discussion paper will endeavour to provide constructive and politically acceptable ideas to solve this.

Budget a step in the right direction