The SMSF segment as a whole appears to have paid zero net tax. But how was it done?

Recently, we looked at the small contribution superannuation is making to Commonwealth tax revenues, making it a target for future measures.

Data just out from the ATO adds a lot more colour to that picture, with detailed statistics released relating to individuals, companies, trusts and, of course, super.

Now we can tell that one of the reasons super is contributing so little to tax revenue is that it appears that SMSFs are paying no net tax – even taking taxable contributions into account – at least for the three years through to 2012.

The chart shows the net tax collected from APRA-regulated funds and SMSFs over the past seven years – covering a cycle of boom, bust, and recovery.

The shape (if not the quantum) of APRA fund tax collections is pretty much what you would expect – rising into the top of the boom, falling sharply in the wake of the financial crisis, and steadily recovering since.

But it’s a different story for SMSFs. Tax collections from SMSFs also rose into the financial crisis and fell afterwards, but unlike APRA funds, they have not recovered. Instead, they have collapsed – indeed the SMSF segment received a net tax refund in 2011 and 2012.

Even at its peak, SMSFs made a much smaller tax contribution per dollar of assets under management than APRA funds. Take 2007: SMSF assets were ~40 per cent of APRA fund assets at that time, but paid only ~30 per cent of the taxes paid by APRA funds.

Jump forward to 2012. The SMSF segment as a whole appears to have paid zero net tax. How was it done?

- Take away the $15 billion of taxable income that related to SMSF pension accounts – this is tax exempt. This also indicates that ~45 per cent of SMSF assets are in pension phase (more if the average return on pension accounts is lower than accumulation accounts)

- Fees, expenses, and other deductions came to $3 billion

- This left SMSFs with net taxable income of $15.6 billion – on which indicative tax at 15 per cent would have been ~$2.4 billion. Indeed, the ATO collected $1.2 billion in PAYG installments over the course of 2012

- Yet when the SMSF tax returns as a whole came in, not only did the ATO collect no more net tax beyond the PAYG instalments, it refunded more than the entire $1.2 billion it had collected during the year

- Enter the miracle of franking credits. SMSFs picked up just under $2.5 billion in franking credits over 2012, completely eliminating the segment’s tax bill, and in fact leaving a bit left over

A few points need to be made here.

- This is an overall segment view. Plenty of SMSFs will be paying tax alongside the many that are not

- The issue illustrates last week’s point – that the evolution of the super system towards the pension phase results in substantial erosion of tax revenues. It has already gone a long way in the SMSF segment 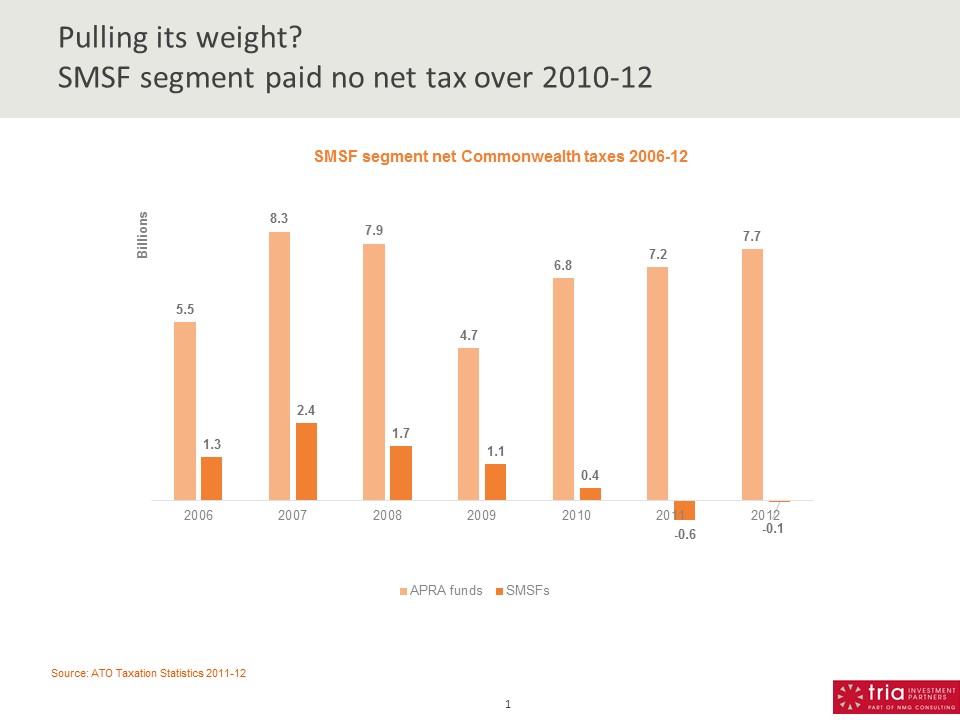 That SMSFs have been paying no net tax as a segment does not necessarily indicate tax avoidance, although it will do nothing to quell the concerns of Treasury and others about some of the motivations in the segment. The data supports anecdotal evidence that a commonly marketed benefit of SMSFs is their ability to eliminate tax.

But regardless of the legalities, in an environment where government is looking for more tax revenue contribution from everyone, to have a super segment of one million of the highest account balance members collectively paying little or no tax is simply not a good look. Especially when mum and dad members in APRA funds are still making a significant contribution. It’s hard to imagine that disparity being allowed to continue for long.

Written by Andrew Baker
Last Updated: 23 April 2020
Published: 28 May 2014
You need to be a member to post comments. Register for free today