The rise of cash and term deposits holdings within SMSFs to $155.4 billion in the December quarter could be harmful to long-term wealth creation for SMSFs, according to a fintech company.

Cash assets according to the company now represent 26 per cent of all SMSF assets.

He also said SMSFs continue to have a home bias with Australian shareholdings jumping 6.3 per cent to $178.4 billion at 31 December 2015, up from $167.9 billion at the end of the September quarter.

On the other hand, he said, only $1.9 billion was invested directly in offshore equities.

Mr Bucknell said the data showed too many SMSFs are falling into the trap of investing into assets that they know rather than into a more diverse range equities, which “over the long term would help to grow wealth at a much faster rate than cash”.

“Like investors everywhere, Australian investors have a home bias, but added to this is a strong bias towards bank and mining shares,” he said.

“A greater exposure to a more varied group of companies, including those listing on the ASX and high-growth, small-cap companies would help to build wealth more effectively over time.” 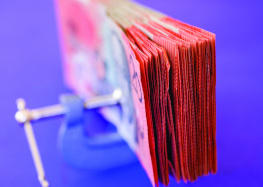