The proposed super reforms will require SMSF practitioners to renew their focus on non-super portfolios and develop alternative retirement strategies for clients.

Freely contributing funds, within the relevant contribution caps, into superannuation to ultimately begin a tax-free super pension has been a safe and appropriate strategy for many SMSF clients. The 2016 federal budget announcements potentially change all that, and as an SMSF adviser, you may already have turned your mind to alternative strategies.

Single individuals over age 65 can receive more than $32,000 per annum of taxable income in their personal name before paying any tax. Based on our long-term return projection assumptions, almost $1 million can be held in a personal name without paying tax on the returns generated in year one. For a senior couple, this figure rises to $1.775 million.

A senior couple can have $3.2 million – $1.6 million each – in superannuation pensions, plus potentially up to $1.775 million in non-super assets, and pay no tax on the returns and pension payments. But this may involve cashing out a significant amount at retirement.

Recommending cashing out funds at retirement flips on its head the previously accepted advice position of maximising funds inside superannuation, and may be a challenging proposition for some advisers.

Consider Carol, a 65-year-old widow with $2.5 million in superannuation.  One option for Carol is to start a pension with $1.6 million and leave the remaining $900,000 in the accumulation phase.  The earnings on the accumulation phase assets will attract tax at 15 per cent or 10 per cent on capital gains if the assets are held for at least 12 months.

Another option for Carol is similar to option one, but she would cash out $900,000 from superannuation and establish a non-super portfolio in her personal name.

Other potential options, albeit less relevant to Carol’s situation, may include investing in a trust (including a family trust), a corporate entity or life insurance/investment bonds. Consideration of these options will be addressed later.

Comparison of $900,000 inside and outside super

There is no tax payable in option two in year one, but this position changes quickly as taxable income grows each year with the overall portfolio growth.  The effective tax-free threshold for a single person over age 65 is $32,279 and up to $28,974 for each member of a senior couple. Beyond this level, the effective marginal tax rate is high – see Chart 2 below.

Effective tax rates on an additional $1.00 of income for single persons aged 65 and over 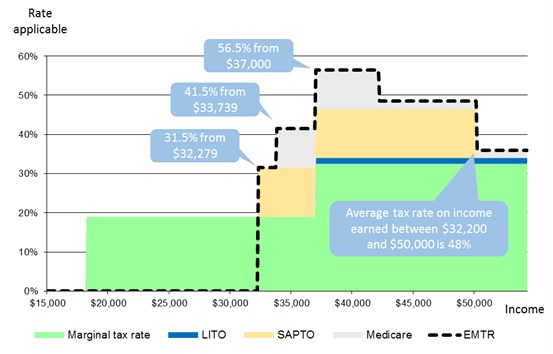 Carol’s non-super portfolio in option two above performs well on an after-tax basis for the first 10 years, but poorly compared to the superannuation option over the second 10 years because of the impact of the high effective rates of tax (shown in Chart 1) on personal income as the portfolio grows.

Chart 2 suggests there is an optimum mix of non-super to super accumulation assets for a given set of return assumptions and the investment time horizon.  Based on our return assumptions here, over a 10-year time horizon the optimum weighting is in the range of 50-60 per cent non-super assets, whereas over 20 years the optimum weighting reduces to approximately 30 per cent 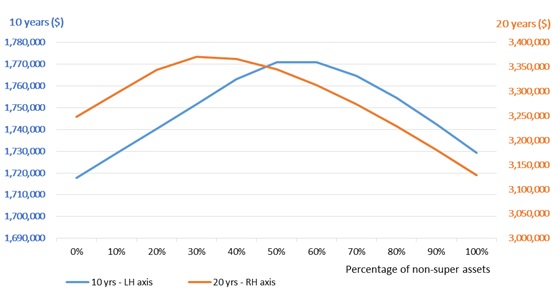 The Australian Life Tables 2010-2012 indicate that Carol can expect to live another 22.05 years. If the aim is to maximise Carol’s total account balances at her life expectancy, the optimum ratio of non-super/super ratio for the $900,000 is approximately 30/70, based on the return assumptions used in this article.

Certain measures announced in the 2016 Federal Budget may result in a renewed focus on non-super portfolios during retirement, but careful management will be required to maintain maximum tax effectiveness.

Written by David Barrett
Last Updated: 08 December 2022
Published: 26 October 2016
You need to be a member to post comments. Register for free today