According to Adviser Ratings, in the last five years, there have been numerous changes to the makeup of the advice market, with today’s advisers largely occupying the growing privately licensed universe, which now makes up almost two-thirds of licensees.

Amid this private licensee growth, Adviser Ratings drew attention to the continued contraction of other parts of the licensee market in 2022 — especially limited licensees and banks.

Namely, banks have gone from covering almost a quarter of the market in 2017 to 2 per cent in 2022, as they wind up their remaining presence.

Privately owned licensees with one to 10 employees made up 25 per cent of the market last year, while 20 per cent was occupied by those with 11 to 100 employees.

In terms of individual licensees, Adviser Ratings clarified that many of the gains and losses happened as a result of mergers and acquisitions. For example, Ord Minnett recently picked up E. L. & C. Baillieu, while WT Financial Group bought Synchron earlier in the year.

Notably, a conflict-of-interest scandal sent Dixon Advisory into voluntary administration in January, while AMP Financial Planning continued to lose advisers to other licensees.

Ultimately, the firm predicted that while the 2022 calendar year brought significant changes to the advice landscape, next year could be an even bigger one for advisers, with the confluence of promised experience reforms, possible tax-deductibility changes to adviser fees and the potential implementation of Quality of Advice Review recommendations. 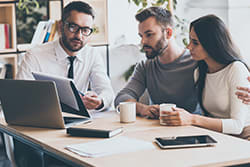