Declining outright home ownership will effectively wipe out superannuation savings of some Australians, leading to a higher reliance on the government and taxpayers in retirement, according to a recent report.

The AIST report shows the declining home ownership due to deteriorating affordability will expose the inadequacy of Australia’s retirement income system, should the trend continue.

Economist Saul Eslake said there is little to suggest the trend will stop, leaving retirees in the next three or four decades in a precarious position.

“An increasing proportion of Australians will reach retirement age having either never attained home ownership or still having at least some mortgage debt outstanding on their homes, which they will then rationally pay off using some or all of their superannuation savings,” Mr Eslake said.

“Failure to address the ongoing deterioration in housing affordability will condemn future generations of Australians to poorer standards of living in retirement, and ultimately result in increased demands for higher levels of financial assistance to retirees, leading in turn to a higher burden of taxation on the diminishing proportion of the Australian population who will still be working.”

Statistics from the ABS show that overall home ownership rates have dipped by 5.5 points since 1966, with nearly half of the drop occurring from 2001.

“These prospects should encourage Australia’s current generation of political leaders to give more thought to what can and should be done to ameliorate or reverse the long-term decline in home ownership rates among people currently aged between their mid-20s and their mid-50s,” Mr Eslake said. 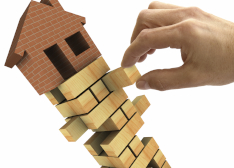