Specifically, gold bullion and gold miners ETFs attracted A$33 million YTD and $19 million in June, which reflects investors’ appetite for the “safe haven asset,” according to VanEck.

“The gold price surged to its highest level in two years [this week] to $US1,368 per ounce, indicating that it could be at the beginning of a new bull market. Gold thrives on financial risks and investors are generally feeling uncertain about the world economy,” said Arian Neiron, Managing Director, VanEck Australia.

“It isn’t just Brexit, but investors are generally feeling cautious because the Fed is unable to normalise interest rates, there is an anticipated RBA rate cut on the horizon, most likely in August, and there are many geo-political risks in the northern hemisphere. All these factors are further supporting investment into gold as a currency hedge and as a way to protect their wealth,” he added.

“Investors are feeling the fall out of Brexit this month and this is reflected in June’s monthly ETP flows. Investors generally moved away from investing in broad based Australian.” 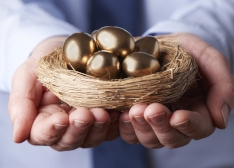